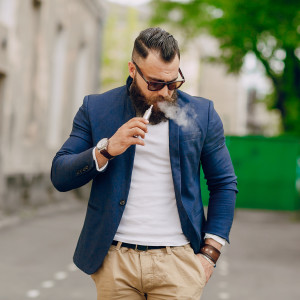 What if the Food and Drug Administration’s crackdown on e-cigarettes actually leads to more smokers?

That was one of many concerns raised during Thursday’s vaping forum at the American Enterprise Institute, one of the Washington’s top conservative think tanks.

Featuring the slogan “Keep Calm and Vape On,” the program came after the FDA issued regulations on e-cigarettes last month “banning their sale to anyone under 18 and requiring that adults under the age of 26 show a photo identification to buy them,” according to the New York Times.

A central argument for the rules is that e-cigarettes will lead more Americans to traditional cigarette addiction, particularly young people. It’s a view embraced by most public health officials in the United States.

But as the AEI program made clear, expert opinion is hardly monolithic on this issue, and there’s a clear case that the FDA’s actions could accomplish exactly the opposite of what they’re intended to achieve. In fact, that was the explicit conclusion of an April report from the prominent Royal College of Physicians in Britain.

“Large-scale substitution of e-cigarettes, or other non-tobacco nicotine products, for tobacco smoking has the potential to prevent almost all the harm from smoking in society,” the report said. “Promoting e-cigarettes … and other non-tobacco nicotine products as widely as possible, as a substitute for smoking, is therefore likely to generate significant health gains.”

Instead of encouraging tobacco use, the study found that e-cigarettes “appear to be effective when used by smokers as an aid to quitting smoking.”

The report found “no evidence” in the United Kingdom for “concerns that e-cigarettes will increase tobacco smoking by renormalising the act of smoking, acting as a gateway to smoking in young people, and being used for temporary, not permanent, abstinence from smoking.”

In addition to all of this, University of Pittsburgh professor Saul Shiffman told AEI the rise of e-cigarettes has coincided with a decline in teenage smoking. “I would not claim the e-cigarettes are completely safe,” he said, “but that’s not the point. The point is being safer.”

AEI scholars noted that e-cigarettes have been criticized by the federal Centers for Disease Control and Prevention as well as the American Lung Association. They also drew the ire of the Campaign for Tobacco-Free Kids, which continues to believe the products will be a tobacco gateway.

In a May statement calling the FDA action “a critical first step – but only a first step,” the group’s president, Matthew Myers, said more needs to be done: “the rule announced today falls short in protecting kids from e-cigarettes. It does nothing to restrict the irresponsible marketing of e-cigarettes or the use of sweet e-cigarette flavors such as gummy bear and cotton candy, despite the FDA’s own data showing that flavors play a major role in the skyrocketing youth use of e-cigarettes.”

Myers criticized the White House this week for abandoning language “that would have removed flavored e-cigarettes from the market until they had been authorized by the Food and Drug Administration,” according to Reuters.