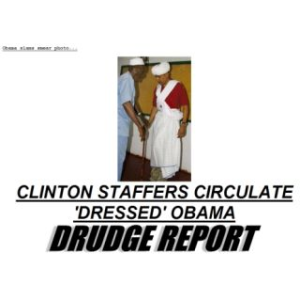 Will the Drudge Report soon face regulation as political speech?

FEC Commissioner: Feds Could ‘Shut Down’ the Internet as a ‘Forum for Speech’

A recent string of split partisan votes by the Federal Election Commission has already produced a chilling effect over political free speech online, but it’s nothing compared to the nightmare Americans could face on a future Internet regulated by the FEC and the Federal Communications Commission.

“It is conceivable to me to see the government saying, ‘We think the Drudge Report is having a disproportionate effect on our political discourse,” FCC Commissioner Ajit Pai said at the Right Online conference in Washington, D.C. on Saturday.

“’He doesn’t have to file anything with the FEC. The FCC doesn’t have the ability to regulate anything he says, and we want to start tamping down on websites like that.’”

It wasn’t the first time Pai warned that his agency – which recently voted to impose the strongest federal regulations ever over the Internet – and the FEC could pose a threat to political speech online.

In February, shortly before the FCC passed its historic net neutrality proposal to regulate the Internet as a public utility, Pai partnered with FEC Commissioner Lee Goodman to pen a Politico op-ed warning of the potential damage to free speech online should the government continue down this road – an issue Goodman was already well versed in.

“We would shut down corporate-owned social platforms as a forum for speech.”

Goodman, a former FEC chairman and one of three current Republicans on the divided six-member commission, recently served as the lead voice against government encroachment over online political speech in two cases that left the FEC divided over its once-unanimous 2006 Internet Communications and Activity Rule.

After passage in 2006, then-FEC Chairman Michael E. Toner said the rules “totally exempt individuals who engage in political activity on the Internet from the restrictions of the campaign finance laws.”

“The exemption for individual Internet activity in the final rules is categorical and unqualified.”

The rule essentially exempts from FEC authority all political commentary, be it blogging, linking, social media, video, etc., posted online for free or at negligible cost by individuals or groups. But recent split votes over the application of the once-unanimous rule have clouded the confidence it was intended to instill.

The campaign included press releases, news articles, emails and more – communications disseminated online that eventually led the FEC to investigate the group for allegedly failing to report them as campaign expenditures.

Though the commission eventually dismissed the case in December 2014 on the grounds that “only a handful of low-dollar communications may have been subject to the Act’s reporting requirements,” Goodman and fellow Republican Commissioner Caroline Hunter expressed concern at the FEC’s failed 3-3 vote to dismiss campaign material posted for free on CREW’s website under the 2006 Internet rule.

“If the FEC were to retreat from the 2006 Internet exemption, the American people would immediately be chilled from speaking freely about politics on the Internet,” Goodman told InsideSources.

“If the FEC were to regulate Internet speech like any other speech, we would have to devise a regulatory regime to count all expenditures in connection with people’s use of the Internet.”

To do so, the FEC would have to establish an unprecedented and unquantifiable bureaucratic and regulatory infrastructure, which could take into account expenses for everything from the production cost of a website to the price paid for a broadband connection.

“Requiring people to disclose an expenditure every time they post political content would severely burden people’s willingness to use the Internet, and their freedom to do so,” Goodman said. “Every blogger would be in a gray zone, begging the commission for a license to speak.”

The third major implication of the FEC stepping away from the Internet rule has to do with what Goodman describes as “coordination.”

“Any political message coordinated with a candidate or a political party would be treated as a contribution to the candidate,” Goodman explained. “If the blogger or a group posting political content is incorporated, coordinated messages on the Internet would be legally prohibited – that is, censored.”

According to Goodman, that means that merely scheduling an interview with a candidate could be construed as an illegal endorsement.

“And the same goes for online posters who wish to re-publish political messages, videos, and flyers created by candidates and political parties.”

Goodman highlighted the issue in a Wall Street Journal op-ed earlier this year, in which he expounded on another 3-3-commission vote over the Internet rule. In 2012 a conservative 501(c)4 organization, Checks and Balances for Economic Growth, produced and posted two videos on YouTube for free – videos they did not report to the FEC.

As a result, the Democratic coalition of the FEC, led by Chairwoman Ann Ravel, voted to investigate the case on the grounds that the YouTube videos should be reported because they were “paid for by the same organizations and the same large contributors as the actual ads aired on TV.”

Ravel added that dismissing the case under the 2006 Internet rule – as was recommended by the FEC’s Office of General Counsel and the three Republican commissioners – “turned a blind eye to the Internet’s growing force in the political arena.”

The commission dismissed the case in another 3-3 split vote over the Internet rule last October, which Checks and Balances attorney Heidi Abegg described as “quite chilling.”

Ravel has since stepped back from the issue, saying she intended the case to highlight that the FEC is “woefully out of step with technological innovations,” and that the commission should begin “listening to outside experts and gathering a broad range of views about new and emerging technologies.”

“For the time being, the Republican Commissioners have won the debate at the FEC over regulating political speech on the Internet,” Goodman said. “Commissioner Ravel said that she had come around on that issue at a hearing we held in “February, and I’m glad she came around. However, the threat has not disappeared, it’s just gone underground.”

But Goodman and the Republican commissioners maintain their concern, and point out the commission is only one vote away from narrowly applying the rule.

“The concern they and I continue to have is that pro-regulation commissioners will try to regulate political speech on the Internet on a case-by-case adjudication basis. This is why I’ve been so vocal and declarative in telling the American public.”

Goodman repeated the assertion he made in the letter with Pai earlier this year that the FCC’s recent decision to expand regulation over the “pipes” of the Internet represents a broader government trend that affects his agency’s territory, the “content that runs through the pipes.”

“The reason Ajit and I wrote the piece was to show the American people the broader effort by government at all levels to begin controlling all aspects of this heretofore free zone of political speech and activity called the Internet,” Goodman said.

“I think if [Pai] saw demonstrable abuses of content by Internet service providers, he might look at something, but here was no predicate for the FCC to start regulating. And there are huge implications for it.”