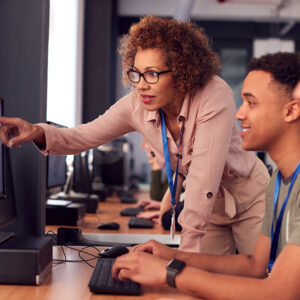 You don’t have to agree with their politics to get the message protesting truckers sent across the border from Canada: The economy depends on truck drivers. And America just doesn’t have enough of them.

According to the American Trucking Association, the nation is currently short by about 80,000 drivers.

Across America, businesses like the HDS Truck Driving Institute in Tucson, Ariz. are working to fill that gap. They are part of an industry of for-profit career colleges pumping employees into the U.S. economy in some of the most high-demand areas: Transportation, nursing, construction, and the service sector.

And because their students access federal financial aid to help cover the costs of their training, they are also forced to keep an eye on Washington, D.C.

The Biden administration’s Department of Education is convening a rulemaking committee to review the regulations for career colleges. Advocates for those schools say the administration’s bias against their for-profit model is tilting the rules against them. And, they say, both their students and the nation’s economy will pay the price.

For example, Colorado’s Denver College of Nursing has 790 enrolled students and has been graduating significant numbers of nurses and health care professionals for years. Nursing programs like it could be at risk due to the Department of Education’s proposed rule changes.

“We only have one seat at the table for a negotiated rulemaking session that is disproportionately aimed at our sector and the issues that impact for-profit schools the most,” said Nicholas Kent, senior vice president of policy & regulatory affairs for Career Education Colleges and Universities (CECUs). “The Biden administration actually appointed two individuals to represent public schools.”

Both two-year and four-year public institutions have a voting seat at the table. For-profit schools – which train individuals in everything from trucking to dental assisting, cosmetology, and welding – have just one.

“So, we’re a little bit disappointed in how the administration is framing out this rulemaking, how they’ve appointed negotiators who share primarily their views,” Kent said.

One key issue is the “90/10” rules, which say no more than 90 percent of a school’s revenue can come from federal sources. It only applies to for-profit career colleges, and not community colleges – despite the fact career schools have higher successful completion rates than their government-run community college counterparts.

“There is an argument to be made here that if this rule was a good rule, it would apply to all institutions, right?” says Kent about the 90/10 rule. “It’s only applied to career schools, private career schools, so, for-profit career schools, and, again, it doesn’t measure whether a student is getting a good education, what it’s measuring is whether or not the student has the ability to pay for some of that education and that’s not how we should be measuring outcomes in this country in higher education.”

Schools like HDS and the Denver College of Nursing get other federal funds that make it harder for them to accept Pell Grant recipients and meet the 90/10 split.

That is particularly a problem for veterans using their G.I. Bill and other benefits seeking to attend a career college in order to get certified in a trade and get into the workforce as quickly as possible.

“Veterans lean toward programs that have an accelerated ‘drink from the firehose’ approach because that’s the kind of environment they had during military training,” said Stephen Patterson, executive director of the Veterans Education Project. “They like programs that have a quick turnaround, to get them back into the workforce quickly. And that goal often aligns with trade schools and proprietary [for-profit] schools.”

Rulemakers could begin counting veterans’ housing stipends in the 90 percent column, rather than the 10 percent, and once again raise the barrier for veterans to attend the programs they choose.

Advocates argue for-profit schools are not only popular but necessary at a time when an estimated 10 million jobs remain unfilled. And amid the “Great Resignation,” as it’s called, one in five healthcare workers have left their jobs as well.

It’s time to make it easier, not harder, for potential workers to fill these jobs.

“Our most popular course is a six-month training program,” is the pitch from Western Welding Academy in Gillette, Wyo. “This is tailored to people interested in a pipe welding career and it shapes and builds the next generation of pipe welders.”

Welding is not just for men.

“Making money off of something I’m very passionate about is easy,” says Leticia Rodriguez, combination welding graduate at Arizona Automotive Institute, a Glendale, Ariz.-based for-profit college offering programs in a variety of fields including HVAC and electrical. “It’s not really like working. It’s what I enjoy doing. Earning a paycheck in something that I love is great.”

Rather than build rules based on “non-profit” vs. “for profit,” Kent says schools should be measured on performance. “Are they graduating their students? Are their students getting good jobs? And are they getting a return on their investment?”

Patterson’s approach is similar. “To be honest, private schools have been on the forefront of online learning, of accelerated courses, the types of things that student veterans tend to lean toward. And as an organization, we are agnostic on the for-profit vs. state-run or non-profit question.

“We just want to see good education and good opportunities for the veterans we serve.”