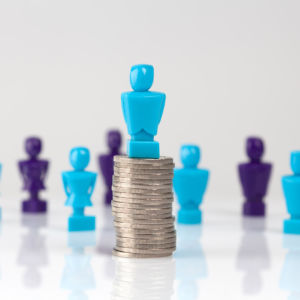 Federal employees outpace those in the private sector when it comes to wages and benefits, except for those workers with advanced degrees, according to a federal report Tuesday.

The federal government employs about 2.2 million civilian workers at 1.5 percent of the total workforce. There are some major differences between the private and public sectors. The Congressional Budget Office (CBO) found federal employees tend to earn more than private sector employees.

“The difference between the wages of federal civilian employees and those of similar private-sector employees varied widely depending on the employees’ educational attainment,” the report stated. “The extent of that variation is evident in the differences in wages for workers with a bachelor’s degree.”

The report adds bachelor’s degrees are the most common level of education in the federal workforce. Those in the private sector only start outpacing federal workers when they have an advanced degree. Federal employees with a professional degree or doctorate made 24 percent less than those in the private-sector.

Federal employees also tend to do better in employment benefits. The cost for benefits was about 47 percent higher for federal employees compared to private-sector employees across all education levels. Those with a professional degree or doctorate received about the same amount of benefits in both sectors.

The report points to defined benefit retirement plans as a major reason why federal benefits cost so much more. Employers contribute to those plans based on an employee’s earnings history. Those plans are becoming less common in the private sector.

Lawmakers have also increased how much federal employees hired after 2012 must contribute to their benefit retirement plans. The change is designed to gradually reduce what the federal government is paying for defined benefit pensions.

The report updates a similar analysis that looked at employees between 2005 and 2010. It found similar results with a few notable differences. Federal wages exceeded those in the private sector by a greater degree in the more recent report. Wages have been growing more quickly among less educated workers in the federal government than they did among workers in the private sector.

Lawmakers have impacted federal wages in a number of ways since the last report. The report points to the elimination of across-the-board salary increases for federal employees between 2011 and 2013. Federal wages have since been increasing at a slower pace compared to the private-sector.