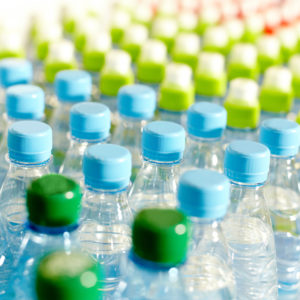 Water may be good for you, but it’s bad for the planet  …  if it’s not sugared.

That seems to be the reasoning behind San Francisco International Airport’s decision to ban “single use” — i.e., disposable — plastic water bottles, which went into effect last week.

Vendors can’t sell them, and people aren’t allowed to buy them.

SFO is “the first airport that we’re aware of to implement this change,” according to spokesman Doug Yakel. Yakel says the new policy is intended to reduce the “28 million pounds of plastic waste” generated by travelers passing through the airport to zero by 2021.

Soda in disposable plastic bottles hasn’t been banned. Tea and fruit juice and other sugary beverages in plastic bottles get an exemption as well. They can still be bought and sold and carried … and the empties thrown away. Which probably means there’ll still be plenty of plastic waste generated by air travelers at SFO when 2021 gets here.

In the meanwhile, thirsty travelers who don’t want the calories (or the diabetes) will have to find a water fountain — SFO refers to these as “hydration centers” — and hope there’s not a line.

Or they can queue up for an “airport authority-approved” reusable plastic water bottle and fill it at the hydration station. But they can’t carry it past security. TSA rules (which pre-empt SFO airport authority rules) forbid taking unsealed containers of liquid — sugared or not, recyclable or not — past the checkpoint.

What happens to all these “reusable” bottles?

Many will probably end up being “single use” bottles too. Maybe people will just queue up for another “airport approved” bottle at another hydration station, beyond the checkpoint.

SFO authorities may not have considered the additional waste the new policy could end up creating, since reusable plastic bottles are usually made of heavier/thicker gauge plastic than single-use disposable water bottles in order to be sturdy enough to be reusable.

How many such bottles will need to be made to keep travelers “hydrated” ante and post security?

More plastic in the aggregate — since one heavier/thicker-gauge reusable plastic water bottle is made of two or three times as much plastic as a single-use disposable bottle.

The reusables also take up more space in landfills — their ultimate destination — because they’re harder to crush, being made of sturdier stuff. While the single-use bottles have a less earth-friendly image, it could turn out that they’re the better-for-the-environment option. They are certainly the less-hassle option.

Travelers at SFO will still be allowed to buy and carry airport-approved sealed glass or aluminum containers past security. These are certainly more sanitary — and might be better for the environment than plastic bottles, single-use or not.

But they’re not going to be good for the wallet. Glass-bottled water is pricey water.

Twelve ounces of glass-bottled water costs about 20-30 percent more than the same amount of water in a more plebeian plastic throw-away bottle. At the airport, the inevitable mark-up will likely mean a jump from the current $2 or so for 12 ounces of water in a single-use disposable plastic bottle to $3 or so for the same thing in glass.

Twelve ounces of water could cost you more than a gallon of regular unleaded at SFO. Best to hydrate before you get there. Or just buy some Coke or Pepsi in a plastic, throw-away bottle.

Which might actually end up being better for the environment, even if all those bottles are thrown away. Because glass weighs more than plastic.

Using more of it may mean less plastic in the trash can, but will almost certainly mean more carbon dioxide in the sky — “emitted” by the delivery trucks that haul the heavier cases of bottled water to the airport — and bring the empties back to the recycling facility.

A case of 24 individual 12-ounce plastic bottles of water weighs about 22 pounds. A case of 12-ounce glass bottles weighs 36 pounds or nearly twice as much.

This will add up in the form of lower miles-per-gallon as well as higher carbon dioxide “emissions.” Even if the progressively minded operators of SFO enlist a fleet of Tesla trucks (which aren’t yet available) to haul the extra tons of glass back and forth, the electricity that powers those not-yet-available electric trucks comes mostly from oil/coal/natural gas-burning utility plants.

Out of sight, out of mind.

In the meanwhile, it’ll be trucks powered by internal combustion engines — many of them diesel engines — emitting substantially more earth-unfriendly things in the name of saving the earth.

Air travelers are likely to get heavier, too, from drinking all that sugared water.

Ironically, the ban on water in disposable bottles will simply encourage people to buy more disposable bottles of sugary soft drinks, sweetened tea and juice since it will be much cheaper and much less hassle than waiting on line at a “hydration center.”

California already has a communicable diseases problem and lots of water (and “approved” containers) being shared — and water sloshed and spilled and standing in warm puddles on the floor — isn’t going to help reduce that, either. The “hydration centers” suck up a lot of energy, too, assuming the water is cooled. But never mind.

SFO authorities will feel better,  and that seems to be the most important thing when it comes to saving the planet.

No matter how much it costs — or inconveniences — air travelers.