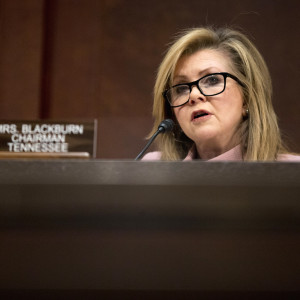 In a debate dominated by female voices from both parties, Republican and Democratic lawmakers sparred Wednesday over the ethics surrounding the procurement for medical research of fetal tissue from abortions.

The first public hearing of the Select Investigative Panel on Infant Lives, created by House Republicans in response to last year’s undercover videos of abortion providers discussing the harvesting of tissue, offered a glimpse into how the issue will play out on the campaign trail this year.

For pro-life Republicans, the lengthy, four-hour hearing presented an opportunity again to put a spotlight on Planned Parenthood, the nation’s top abortion provider, and the processes associated with procuring fetal hearts, brains, lungs and other organs for medical research.

Rep. Marsha Blackburn, R-Tenn., who chairs the panel, opened the hearing with an attempt to head off Democratic criticism, telling colleagues, “We did not invite our guests here to debate election-year politics or journalism ethics.”

The videos that prompted the hearing, she said, “revealed that something very troubling is going on related to fetal tissue and research.”

But Democrats focused their questioning on Blackburn’s handling of the panel and on the ethics of the undercover sting operation that brought some of the Planned Parenthood practices to light.

The self-described “citizen-journalist” behind the videos faces charges in Houston and is under investigation in California, accused of using falsified documents to pull off his anti-abortion group’s investigation.

The ranking Democrat on the panel, Illinois Rep. Jan Schakowsky, dismissed Wednesday’s hearing as a “partisan and dangerous witch-hunt” and compared Blackburn to Sen. Joseph McCarthy.

California’s Jackie Speier picked up on the McCarthyism theme: “I feel like a time-traveler, not a member of Congress … maybe we’ve been transported back to the Red Scare.”

But first-term congresswoman Mia Love, a black Republican from Utah, rebuffed Democrats who accused Republicans of attempting to overturn established law regarding abortion.

The four witnesses invited to appear before the committee by Republicans were critical of the use of tissue from aborted fetuses for medical research, while the two witnesses called by Democrats credited advancements in the treatments of disease to research based on fetal tissues and stem cells.

“We gain nothing when we turn our backs on the benefits of this research for people who are sick today, or will be sick tomorrow,” testified R. Alta Charo, a University of Wisconsin professor of law and bioethics.

Democrats, who called for the panel to be disbanded after the indictment last month of anti-abortion activists David Daleiden and Sandra Merritt, criticized Blackburn’s decision to issue subpoenas recently against three organizations — StemExpress, the University of New Mexico and Southwestern Women’s Options — as heavy-handed.

But Democrats are also gearing up for a prolonged fight, hiring former Planned Parenthood staffer Vanessa Cramer to help plan their defense of the organization, according to LegiStorm.

Asked if hiring a former Planned Parenthood staffer to work on a congressional investigation into the organization’s practices might constitute a conflict of interest, Blackburn’s office told InsideSources the Tennessee Republican would not comment on staffing decisions of other offices.

The clash between House lawmakers on fetal tissue came as hundreds of protesters on either side of the abortion debate gathered across the street at the Supreme Court Building where eight justices heard arguments on restrictive new laws in Texas.

The vacancy on the Supreme Court left by the death of Antonin Scalia has already become a key issue in the presidential race, with Donald Trump’s top GOP rivals questioning the New York billionaire’s commitment to conservative justices – particularly on the issue of abortion.

With Senate Majority Leader Mitch McConnell vowing to leave the opening to the next president, the Supreme Court and the abortion issue are expected to figure heavily in this year’s Senate races as well, especially in states where moderate Republicans are seen as vulnerable.