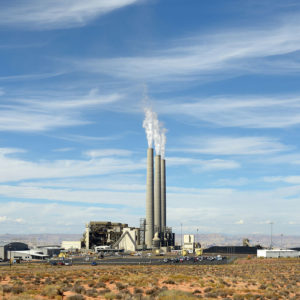 The decline of coal is generally associated with Appalachia, where state economies suffered when cheap natural gas became the fuel of choice for electricity generation. However, the transition away from coal has become a major topic of debate in Arizona, where the Navajo Generating Station (NGS) provides power for the Central Arizona Project (CAP), a massive piece of water infrastructure in the center of the state, as well as jobs for hundreds of Navajo and Hopi tribe members. The owners of the Navajo Generating Station announced last year that they would prematurely retire the plant at the end of 2019, saying that it could not compete with the rate prices offered by natural gas generation. It has been a surprisingly contentious claim. On Tuesday, Interior Secretary Ryan Zinke tweeted about his commitment to keeping the Navajo Generating Station open, even as studies disagree over the financial health of the plant.

In his tweet, Zinke wrote that the department was “committed” to keeping the station and attached coal mine open to preserve tribal jobs. Hundreds of jobs held by Native Americans would be lost as a result of the closure.

“The plant supports high-paying jobs with good benefits, and we see those dollars flow into the community through the purchase of goods and services and support of our local businesses.  You simply can’t replace this contribution through minimum wage jobs in the service industry,” explains Bill Diak, the mayor of Page, Arizona, where the plant is located.

Diak is part of a larger coalition of labor and business groups that support keeping the plant open. Additionally, Lazard, an investment bank, has sent a letter to Central Arizona Water Conservation District (CAWCD), which manages CAP, to say Lazard has identified potential buyers of the plant.

A recent report by Energy Ventures Analysis (EVA) argues that if the generating station closes, Arizona residents would see higher water costs and be saddled with more than $100 million in decommissioning costs. The report also found that, because of relatively fixed overhead costs, rates increased as the CAP decreased the amount of power it bought.

“The higher the amount of energy purchases from NGS, the higher the savings to CAWCD. Should CAWCD decide to return to pre-2016 purchase levels, when approximately 90 percent of its energy needs were sourced from NGS, CAWCD customers will save almost $370 million through 2030,” the EVA report found. “On the other hand, should CAWCD continue to purchase only 50 percent of its energy needs from NGS, as it did in 2016, these cumulative savings are less than $40 million through 2030.”

The EVA report argues that the generator is profitable if the CAP continues to use it as a major source of power. This differs from the analysis given in a study by the Institute for Energy Economics and Financial Analysis (IEEFA) last spring. According to the IEEFA, the market pressures that made the NGS a less attractive source of power for the CAP will only continue to get worse. To keep the power plant and coal mine open would require massive subsidies.

“We put the price of keeping the Navajo Generating Station open from mid-2017 through the end of 2019 at $414 million. Extending that bailout to keep NGS operating from 2020 until 2030 would cost an additional $1 billion to $2 billion, meaning a total bailout of $1.4 billion to $2.4 billion would be required to keep NGS operating from mid-2017 through the end of 2030,” says the IEEFA, which puts the cost of a five-year bailout plan, which has been suggested by one member of the Arizona Corporation Commission, even higher. Over five years, a bailout would cost between $740 million and $1 billion.

IEEFA’s analysis factors in the impact of decisions by three Arizona utilities not to purchase power from the plant, since they had access to cheaper power from natural gas generators. Without these customers, the NGS must rely even more heavily on the CAP.

When discussing the future profitability of the NGS, the key variable is the price of natural gas. Although America’s fracking boom has flooded the market with astoundingly cheap fuel for years now, analysts predict that prices will rise in the future. The question is, how much?

In its analysis, the EVA uses an estimate that by 2025, the price of natural gas will be $4.54/mmbtu. This is noticeably higher than estimates made by other sources, which predict U.S. gas prices at $4.10/mmbtu. It also presumes that coal prices will remain relatively stable during this period.

While the costs of keeping the plant open will fluctuate with the price of natural gas, closure of the Navajo Generating Station and the mine which feeds it will have a dramatic negative effect on the local job market. Understandably, many people want to try to keep the plant open as long as possible to cushion this blow.