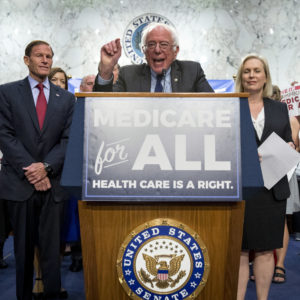 According to a new report by a nonpartisan fiscal watchdog organization, all of the healthcare proposals from the four leading Democratic candidates could create trillion-dollar deficits if enacted. And the biggest deficit hole would come from Sen. Bernie Sanders’ Medicare for All plan which — in the worst-case scenario — could add nearly $20 trillion in federal debt.

That’s the finding of The Committee for a Responsible Federal Budget (CRFB), which is widely respected due to its academic approach to budget issues and its bipartisan leadership, including co-chairs Mitch Daniels, (who served as director of the Office of Management and Budget under President George W. Bush) and former Clinton White House Chief of Staff Leon Panetta.

“For each plan, we score the fiscal impact of coverage and other spending provisions, reductions in current and proposed health care costs, direct offsets proposed as part of their plans to expand coverage, and further offsets meant to finance remaining costs,” the CRFB report states. The organization created three separate estimates of costs and coverage — high-cost, low-cost and central. Then using the central estimate they project that over 10 years:

This fiscal analysis is particularly timely given the Congressional Budget Office’s (CBO) new Budget and Economic Outlook released Tuesday projecting a federal deficit of $1 trillion in 2020, adding to the more than $23 trillion in current debt.

The report repeatedly reminds readers that the CRFB is operating on relatively little specific information about the plans. “While the candidates have proposed significant new tax and spending policies, the detail and specificity on their campaign websites is less than what would appear in legislation. Furthermore, few of the specific policies have been scored by the Congressional Budget Office (CBO), and many have not been estimated in their current forms by impartial sources,” the report states.

It does, however, offer an apples-to-apples comparison of the candidates’ proposals when it comes to the number of people they would insure and the impact on the federal budget.

If providing healthcare to all Americans is a voter’s top priority, for example, then Sanders and Warren offer the way to go:

For voters concerned about adding a new entitlement to the federal budget, Pete Buttigieg has the only plan that theoretically reduces deficits in the central estimate. In the CRFB’s high-cost estimate, all of the plans cost more than they bring in, but in their low-cost estimates every plan lowers the deficit — except Sanders. His Medicare For All proposal adds nearly $9 trillion in debt under the rosiest of scenarios and nearly $20 trillion at the high end.

All of the plans rely on massive tax hikes and revenue increases, ranging from Joe Biden’s $1 trillion to Warren’s $20 trillion, along with various forms of government-imposed price and cost controls. These policies would impact the healthcare market, however the CRFB’s report doesn’t look at the broader economic impact of the plans.

“Health reform is about how much we pay in total and who runs the system, but it’s also about who pays how much. From a fiscal policy perspective, reducing or eliminating premiums and cost-sharing is much more significant than the impact of having the government playing a larger direct role of financing health spending,” the CRFB’s Marc Goldwein told InsideSources.

Some economists who spoke to InsideSources agree with the premise but argue that their viewpoint is just too narrow.

“Several years ago, I wrote that an explicit shift toward greater government control over healthcare would probably not be as earthshattering as many conservatives fear, because government involvement in healthcare is already so pervasive that our system acts even now like a quasi-single-payer system,” said Robert F. Graboyes, senior research fellow on health and technology as the Mercatus Center. “Ending out-of-pocket costs would almost certainly have a greater impact, because it would expand demand for healthcare without expanding the supply of healthcare resources.

“The tax impact might well have the greatest impact were we to move to Medicare for All; almost certainly, Congress would have to finance the program using enormous tax increases on income and/or wages, thereby creating powerful disincentives to investment and work. This is an argument I first heard from CRFB’s Marc Goldwein, and I find it highly persuasive,” Graboyes said.

Healthcare expert Avik Roy of The Foundation for Research on Equal Opportunity (FREOPP) told InsideSources, “I have great respect for CRFB as an organization, but I don’t agree with their analysis. They say that the Warren plan will increase the deficit by $6.1 trillion over 10 years. Our analysis found it will increase the deficit by $15 trillion. And that’s just the Warren plan.”

“The FREOPP report specifically addresses the marketplace issue: “Elimination of patient cost-sharing will lead to soaring demand for health care services,” Roy writes. “The Warren plan does nothing to increase the supply of health care providers to keep pace with this soaring demand. Those whose incomes or wealth are below the U.S. median will have the most difficulty accessing care in such an environment.”

Marc Palazzo, executive director of the Coalition Against Socialized Medicine, also notes the unintended impact of the Democrats’ approach. “A government takeover of the health care industry comes with a hefty price tag of up to $52 trillion, a price that would inevitably be paid for with crushing taxes and a mountain of new national debt — and that doesn’t account for the human cost.”

“Implementing socialist price controls on the very innovative treatments that help save lives would radically reduce biopharmaceutical innovation. There is no doubt these plans would cause more harm than good for the patients they are supposed to serve,” Palazzo said.