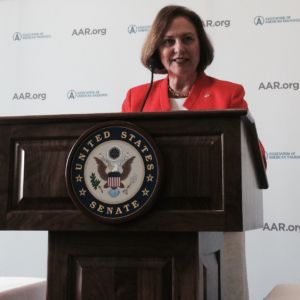 There are 3,300 miles of railroad across Nebraska, and many of them carry the fuel that generates two thirds of the states’s power — coal.

But if President Barack Obama’s Clean Power Plan continues to diminish the coal industry in the Cornhusker State and across the country, the rail economy will suffer.

That was a message Nebraska Sen. Deb Fischer, a Republican, delivered Wednesday on Capitol Hill, speaking to a policy luncheon organized by InsideSources with the Association of American Railroads.

“The Obama administration’s war on coal is hurting families across all industries that rely on clean coal for their jobs,” the senator said of Democratic anti-coal initiatives intended to combat climate change.

She later added, “Two thirds of Nebraska’s energy comes from our coal-fired power plants, and they rely on railroads to deliver that clean and reliable coal.”

Fischer said she’s pleased that the Supreme Court issued a “stay” of the Clean Power Plan in February, but was dismayed that the Environmental Protection Agency is nevertheless moving forward with parts of it, downplaying the court’s ruling.

Fischer was scheduled to be joined at the bipartisan luncheon by New Jersey Sen. Cory Booker, a Democrat, but the Garden Stater instead took to the Senate floor and aided his Democratic colleague from Connecticut, Sen. Chris Murphy, in a talking filibuster over gun control.

Booker backs the Clean Power Plan, and in 2014 he called it “a common sense proposal” that “represents a major step forward in our national effort to reduce greenhouse gas emissions and fight climate change.”

Fischer acknowledged her disagreements with the senator — “Booker’s pretty liberal and, well, I’m from Nebraska,” she said — but the cattle rancher also called the New Jersey vegan “a very good friend and a good colleague.” They’ve found agreement on support for railroads.

Prior to Fischer’s remarks on Wednesday, a panel of experts weighed in on “How Freight Railroads and Smart Policy Support the Economy.”

Towson University economist Raquel Frye talked about how more than one percent of all American jobs are connected to railroads, and most of these are high-paying with good benefits. In addition, she said, the employment of one person by the railroad industry creates an average of nine other jobs in related sectors.

For his part, Brookings Institution economist Clifford Winston discussed his enthusiasm about automated vehicles ultimately revolutionizing railways. “If you think about it, this is exactly the kind of innovation that can drastically improve and change the surface transportation industry,” he said.

Watch “How Freight Railroads and Smart Policy Support the Economy” from InsideSources and the Association of American Railroads: