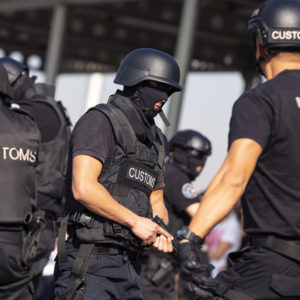 In the case of Hernandez v. Mesa, the facts were not at issue: Sergio Adrian Hernandez Guereca, an unarmed 15-year-old Mexican teenager, was playing with his friends in the culvert that defines the border between El Paso, Texas, and Ciudad Juarez, Mexico, when he was shot in the face and killed by Border Patrol agent Jesus Mesa Jr. in 2010.

The Supreme Court accepted that the teenager was protected by the Fourth and Fifth amendments to the U.S. Constitution, and that those constitutional rights were violated by the wrongful shooting. The only question before the court when it considered Hernandez’s case late last year was whether U.S. law provides the child’s family with any remedy for that violation.

Five conservative justices just said no. Based on the oral arguments, it was clear the case would turn on where the Supreme Court might draw the line if it were to allow a foreign national who was deprived of constitutional rights on foreign soil to bring a damages lawsuit against a federal official acting within the United States.

In response to aggressive questioning by Justice Neil Gorsuch, the lawyer for the teenager urged the court to draw the line at traditional law enforcement activities.

Historically, courts have recognized damages claims arising out of the use of excessive force by rogue law enforcement officers, and law enforcement abuses were the issue in Bivens v. Six Unknown Named Agents of the Federal Bureau of Narcotics, when the Supreme Court first found an implied cause of action for constitutional injuries.

As Justice Sonia Sotomayor illustrated perfectly during the arguments, that would mean a Border Patrol agent in the United States could literally spray bullets indiscriminately into Mexico, kill Mexican citizens, and be totally immune from suit regarding the deprivation of their rights.

The lawyer representing the United States concluded his argument by taking things a step further than the agent’s attorney.

Arguing that in the “easiest hypothetical” of foreign nationals who have fully crossed the border into U.S. territory — and maybe even in the case of someone shot and killed by an agent several miles into the United States — allowing a cause of action would implicate “foreign relations and national security concerns,” and would therefore likely not be advisable.

The Supreme Court’s 5-4 decision essentially adopts the government’s extreme argument, but notes that the fact that the child was killed in Mexico — though the tortious act was committed in the United States — also cautions against extending to the family a right to sue.

The question for the court wasn’t as simple as the one Justice Gorsuch asked, because no matter how the Supreme Court decision was going to turn out, lines were going to be drawn. Agent Mesa’s attorney argued that the line be drawn — literally — at the border that separates the United States from Mexico, except in the event that the person killed happened to be a U.S. citizen.

The lawyer for the government effectively argued that the line be drawn around foreign nationals, whether abroad or in the United States. In that case, the line would define them as uniquely prohibited from filing damages lawsuits to recover for an unconstitutional deprivation of their rights by federal officials acting in their official capacity.

Put another way, the line would be drawn around Border Patrol agents — or maybe even all federal immigration officials — and would define a set of federal officials who would effectively be granted a special dispensation to deprive people of their constitutional rights with impunity.

The Supreme Court did not decide exactly where to draw the line, but instead included a couple of throwaway references to the fact that Mesa was stationed along the border at the time of the shooting.

But why would the same foreign relations and national security concerns relied upon by the court’s reasoning not equally extend to Border Patrol actions inside the United States? Would not an Immigration and Customs Enforcement agent in Tennessee who unconstitutionally shoots and kills a foreign national during the course of a worksite raid similarly enjoy absolutely immunity from suit?

Complaints about excessive and often lethal force by Border Patrol agents — both along the border and across the border — are alarmingly common. And as two former, high-level U.S. Customs and Border Protection officials explained in an amicus brief filed with the court, the agency has long lacked meaningful oversight and accountability mechanisms.

The court’s decision in this case sets a dangerous — and perhaps deadly — precedent regarding the judiciary’s commitment to protecting the rule of law within our nation and along our borders and to the value it places on human life.

Tom Jawetz is the vice president of immigration policy at the Center for American Progress.