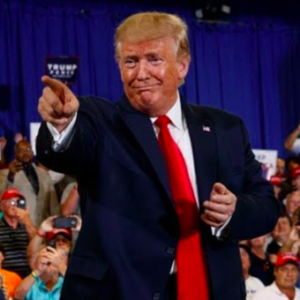 At a campaign rally held in New Mexico Monday, President Trump went out of his way to court the state’s large Hispanic audience. But an exchange with a close Hispanic colleague has people raising eyebrows — and Democratic 2020 candidate Julian Castro labeled it “racist.”

In a state with the country’s largest Latino population — nearly 50 percent of New Mexicans consider themselves Hispanic — the crowd was receptive to the president’s overtures and compliments.

Many bore Trump swag, including hats, signs and T-shirts that proclaimed: “Latinos for Trump.” Some also carried placards distributed by the Trump campaign that encouraged attendees to text “VAMOS” (“Let’s Go”) to a campaign number.

“Median income for Hispanic Americans surpassed $50,000 for the first time ever,” he said. “That’s your median! That’s not bad! That means you’re, wealthy, and you’re getting wealthier fast.”

Trump then called out to Hispanic Advisory Council member and pro-Trump CNN commentator Steve Cortes saying he “looks more like a WASP than I do.”

The exchange drew some angry reactions.

“The Latinx community won’t be [b]othered by Donald Trump,” Democratic presidential candidate Castro tweeted Tuesday. “We won’t be scared of his racist rhetoric. We will defeat him.”

Later on CNN, Cortes and host Chris Cuomo got into a confrontation on whether Trump’s comments were indeed racist. Cortes argued the real bigotry lies with those who try to make the “border into a racial issue when it’s not.”

Cuomo would have none of it.

“When you are a member of a group that has been denigrated time and time and time again, this man who described the caravans coming here as being mostly murderers and rapists and ‘some I assume are good people’ and all this stuff about the s-hole countries and what he said about Puerto Rico… You can’t forget that stuff when you’re in that community,” Cuomo said.

Cuomo later tweeted: “Trump supporter @CortesSteve, who POTUS said looks more “wasp than I do,” says fellow Hispanics care more about what Trump does than what he says. It’s not “so important they have a man who speaks in an incredibly measured and lawyerly way… he’s making their lives better.”

Cortes stood up for Trump in his own tweet: “Re: the President’s comments to me last night at the rally — awkward phrasing but he was merely trying to point out that I love this country AND Hispanics a whole lot, joking that he can’t tell which I love more. Critics should stop imputing malice where there is none. #MAGA.”

Even late-night comedians took shots at Trump’s attempt to woo Hispanics and the Cortes call out.

“Trump asked Steve Cortes, ‘Who do you like more, the country or the Hispanics?’ Coincidentally, that’s also the first, and only, question asked in a White House job interview,” said James Corden of the “Late, Late Show” on CBS.

“So after four years of Donald Trump throwing Latinos under the bus that he stopped at the border, by saying that illegal and legal immigrants are all coming to kill us, Trump’s plan to win is to woo Hispanic voters,” said Stephen Colbert, host of “The Late Show” also on CBS. “Woo, boy. Buena suerte with that, el Trumpo. Right now, Trump’s approval rating among Hispanics is 25 percent, so, this is like Cruella de Ville trying to woo Sarah McLachlan.”

Colbert was referring to a new Washington Post-ABC News poll, which found that only 25 percent of Hispanics approve of the job Trump is doing as president ― considerably lower than his overall approval rating of 38 percent.

In addition, a recent Univision poll — conducted by Latino Decisions and North Star Opinion Research — shows that 73 percent of Hispanic voters surveyed plan to vote for a Democratic candidate, while only 16 percent plan to vote for Trump.

Trump would need about 40 percent of the Latino vote in New Mexico to win the state, said University of New Mexico political scientist Gabriel Sanchez, a principal at the polling firm Latino Decisions.

A large number of New Mexican Hispanic voters are conservative, added Lonna Rae Atkeson, director for the Study of Voting, Elections, and Democracy at the University of New Mexico.

Trump has the most support in the southern part of the state, but “I can’t imagine him picking up Hispanic Democrats in northern New Mexico where they dominate,” she told NBC.