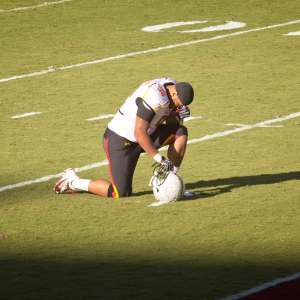 Football Scandals and the Nobel Prize in Economics

It is a sick joke on the victims of sexual assault and abuse. Eric Barron was president of Florida State University in 2012 when Jameis Winston, who would go on to win the Heisman, was accused of rape. The university and the Tallahassee Police Department failed to adequately investigate, sweeping the charges under the rug. The university’s failure is an apparent violation of federal law. And yet somehow, earlier this year, Mr. Barron was appointed president of Penn State University, a school infamous for the cover-ups of child sexual abuse in its football program.

The news is filled with accusations of disturbing crimes at all levels of football—high school, college, and pro. Ray Rice. Adrian Peterson. Aaron Hernandez. Ben Roethlisberger. Maurice Clarett. It would take far more than the length of this column to name the football stars who have been confronted with serious accusations of domestic violence, child abuse, murder, sexual assault, and armed robbery.

Offenders must face prosecution. Unfortunately, it is too often the case that police, prosecutors, school administrators, coaches, and parents are willing to overlook crimes. Football is big money, and we give its players an esteemed status in our culture.

Take Ray Rice. He avoided three to five years in prison through a pretrial intervention program that was granted in less than 1 percent of domestic violence cases. Further, the NFL maintains it was unaware of what happened in the elevator until recently viewing the video released by TMZ—as if anyone actually doubted what the video would show?

Back to the case of Jameis Winston—the investigating police officer, who prosecutors blame for a series of mistakes, had a conflict of interest in the case. An investigation by the New York Times found he had done private security work for the Seminole Boosters, the primary financial backer of Florida State athletics. The Seminole Boosters also paid a quarter of FSU president Eric Barron’s $602,000 salary.

And sadly these cases extend down to the high school level. We have just recently learned of the sexual assault charges for seven upperclassman at Sayreville War Memorial High School. The superintendent of the school district announced preliminary findings of an investigation that shows the intimidation, often with sexual overtones, “took place on a pervasive level, on a wide-scale level and at a level in which the players knew, tolerated and in general accepted.”

But what most outrages the parents of these children? The football season has been cancelled. Does anyone honestly believe the coaches and other players were unaware hazing was taking place?

Football is in crisis. And the problem begins with decades of failed oversight. Football’s troubles do not stem simply from the thugs who commit these crimes. This is also about those charged with stewardship of the sport. Local school districts, the NCAA, and the NFL are all to blame. They have murky, arbitrary rules so that the system can be gamed to benefit the teams and the leagues.

This extends below the criminal level. Bill Bellichick remains the Patriots’ head coach after a cheating scandal in which NFL Commissioner Roger Goodell had all the evidence destroyed.

Jim Tressel was forced to resign as Ohio State’s coach because of his knowledge of a merchandise-for-tattoos scandal that he ignored. But Tressel, despite his lack of academic credentials, has now become Youngstown State University’s president, where he has authority over athletics.

The system is deeply flawed.

And thus we come to the work of Jean Tirole, who won the Nobel Prize in Economic Sciences earlier this week. We also cannot ignore the studies of the late George Stigler, another Nobel laureate. Both economists are best known for their work on regulation, and our interest here is in the study of “regulatory capture,” where a regulator colludes with the regulated industry.

Despite their clear monopoly status, the NFL and NCAA face little oversight from government. Instead, both largely self-regulate. The NCAA was actually created in response to regulatory concerns raised by Teddy Roosevelt. Schools likely prevented increased scrutiny by forming their own regulatory body. Should anyone be surprised that a system controlled by member schools or the NFL team owners fails to adequately police its league?

A key lesson from Tirole is that each industry is fundamentally different, and its regulation must be handled in a way that prevents abuse but also allows the economic actors to succeed. Government should tread lightly, but the constant stream of news about football shows that changes should be made. Too often, government will jump into the regulatory game and create impossibly complex rules in which punishments are negotiated, arbitrary, and lacking transparency. That would perpetuate the current system. Instead, rules must be concise and set clear standards for how problems should be addressed.

It is little wonder that football seems out of control when those involved in the sport have been able to push the boundaries for so long. Hopefully football can be saved from its failed self-regulation.