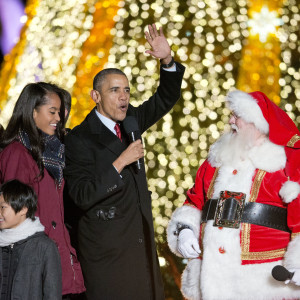 President Barack Obama, center, waves to the crowd as he walks off stage with his daughter Malia, left, during the National Christmas Tree Lighting ceremony at the Ellipse in Washington, Thursday, Dec. 3, 2015. (AP Photo/Pablo Martinez Monsivais)
News

For Christmas 2015, Obama Talks Up His Own Christianity

Barack Obama has never been overt enough about his Christian faith to satisfy critics on the religious right — and this year’s annual videotaped White House Christmas message isn’t likely to change that.

Still, in the greeting posted online Friday, the president, a Christian some Americans — nearly a third — continue to think of as Muslim, wished the nation a “Merry Christmas” and offered brief testimony on the power of Christianity.

“Today, like millions of Americans and Christians around the world, our family celebrates the birth of Jesus and the values he lived in his own life,” the president said. “Treating one another with love and compassion. Caring for those on society’s margins: the sick and the hungry, the poor and the persecuted, the stranger in need of shelter — or simply an act of kindness.

“That’s the spirit that binds us together — not just as Christians, but as Americans of all faiths. It’s what the holidays are about: coming together as one American family to celebrate our blessings and the values we hold dear.”

Obama came under some criticism earlier in the holiday season for remarks he offered in commemoration of the 50th anniversary of “A Charlie Brown Christmas.”

The holiday classic, an animated meditation on the “true meaning of Christmas,” culminates with the reading of Bible verses Luke 2:8-14 — the story of the birth of Christ.

In his comments for the anniversary show, Barack Obama said “A Charlie Brown Christmas” teaches “us that tiny trees just need a little love and that on this holiday we celebrate peace on Earth and good will toward all.”

Last week’s greeting was the president and first lady’s seventh such holiday message, and as has become their tradition, the couple thanked members of the armed services and their families for their service. Previous messages have also, usually, mentioned the “birth of Jesus,” and included a “Merry Christmas” from either the president or the first lady.

On Christmas Eve last week, the president also released a statement of support for persecuted Christians around the world:

Michelle and I are also ever-mindful that many of our fellow Christians do not enjoy that right, and hold especially close to our hearts and minds those who have been driven from their ancient homelands by unspeakable violence and persecution.

In some areas of the Middle East where church bells have rung for centuries on Christmas Day, this year they will be silent; this silence bears tragic witness to the brutal atrocities committed against these communities by ISIL [the Islamic State].

The Obama administration has been accused by some on the right of being a part of the cultural “War on Christmas,” with critics taking aim at everything from the secular tone of the annual White House holiday card to federal policies on whether “Merry Christmas” or the more secular “Happy Holidays” is the preferred greeting for the season.

Republican presidential front-runner Donald Trump made headlines earlier this year by railing against the use of “Happy Holidays,” repeatedly dismissing the phrase as “political correctness.”

“We are, together, going to make America Great Again!,” the card reads. “I Love You All, Donald J. Trump.”