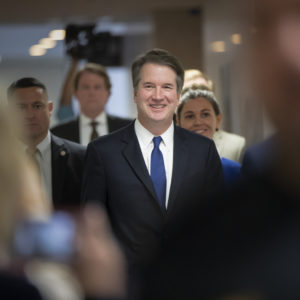 On the same Wednesday of his impeachment, that night Donald Trump spoke at one of his customary rambunctious rallies, this time in Battle Creek, Mich. He touted the manufacturing sector during his presidency, bellowing, “Look what I’ve done for steel. I mean, the steel is back.”

Two days later, CNN reported that a steel mill near Detroit announced the facility was set to close in the spring. That meant a loss of 1,500 jobs.

A damper on the steel-mill industry for sure, mere hours after Trump’s pronouncement. However, another industry flaunted by Trump is humming right along.

That is Trump’s appointments of conservative judges to the federal courts, yes, in classic mill assembly-line fashion. Just days before he was impeached, Trump’s 50th appointment to the circuit court of appeals was confirmed by the Mitch McConnell-led U.S. Senate.

Fifty in three years. So, as federal judges retire or die, the tag-team of McConnell and Trump are seizing the moment.

For comparison, President Barack Obama was able to confirm 55 judges to the circuit or appellate courts. That was in eight years of his two-term presidency.

These developments prompted Michael Smerconish, who hosts his eponymously named news/talk show for CNN, to ask for his weekly social-media poll: What will be Trump’s legacy — impeachment or federal-judge appointments, assuming he isn’t removed from office?

Most of us pay rapt attention to appointees/rulings from the Supreme Court — the highest level. But a step below that, federal courts hear cases deemed just as important, from issues of gun rights to abortion, immigration, felony crimes, religious liberties, etc.

And as Robert Cottrol, veteran George Washington University law professor who specializes in Second Amendment rights, said: “The Supreme Court rules on about 80 cases a year, while the federal courts hear cases in the thousands. It’s impossible for the Supreme Court to ride herd on everything that goes on in the world of federal courts.”

To use a sports analogy, how is Trump able to run up the score in appointing a torrent of federal judges, who tend to be way more conservative and way younger than Obama’s appointments, like by 10 years, as in age 50 and under?

—The Merrick Garland Treatment. Remember when the Republicans took over the Senate during the Obama administration, McConnell refused to even hold hearings on Garland — then Obama’s appointee to the Supreme Court — for Senate confirmation. McConnell simply extended that practice to the federal courts.

—Previously, a practice known as the “blue slip tradition” gave deference to U.S. senators in their home states in influencing who was chosen for federal benches. However, McConnell and Trump put the kibosh on that senatorial legacy.

As national media obsess with impeachment and Trump’s daily scandals/soap operas, Trump maintains warp-speed on the judge-appointment front. These lifetime appointments can reshape U.S. laws for generations to come. Long after Trump is out of office, long after he’s dead.

View the situation through this prism: Suppose Trump appoints a conservative judge who is 46 years old. And he or she has aspirations of following in the footsteps of the truly inspirational Ruth Bader Ginsburg in the age category on a federal bench. Ginsburg, at 86, is the oldest Supreme Court justice, which means that 46-year-old newcomer would serve for 40 years. Meaning he or she

would retire from a federal judgeship in 2060.

Most staggering. And coolly calculated by the Trump administration.

“I think with Trump, everyone is distracted by ‘the show,’’’ said Cottrol, author of the book “The Long, Lingering Shadow: Slavery, Race, and Law in the American Hemisphere.”

In other words, it’s time to pay attention. And imagine if Trump is re-elected and Republicans maintain control of the Senate throughout his second term.

Case in point: The 9th Circuit Court of Appeals, based in San Francisco and widely considered the most liberal in the nation, encompasses the West Coast states as well as Nevada, Arizona, Hawaii and others. The 9th Circuit also famously — or infamously — ruled that reciting the Pledge of Allegiance in schools was unconstitutional because of its religious references.

This circuit has 29 active seats, with Trump appointing 10 of them, which means “it’s likely to become more conservative,” Cottrol surmised.

And by the way, Smerconish’s in-show poll survey revealed that 60 percent of its 8,197 respondents voted that Trump’s legacy will be defined by his federal-court appointments.