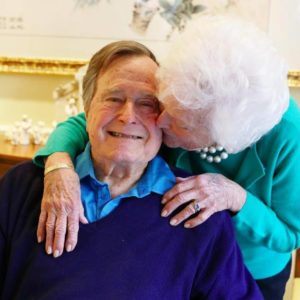 For George H.W. Bush, 73 Was an Amazing Number

The background: Powell in 1987 left as commander of U.S. armed forces in Germany to join the Ronald Reagan White House as national security adviser while retaining his Army rank of lieutenant general. In April two years later, Powell was promoted to four-star general at the beginning of H.W. Bush’s presidency.

One day while attending a luncheon at the French Embassy in Washington, Powell was seated next to Barbara Bush. That was their first meeting. The conversation went like this, Powell recalled, after he introduced himself to her:

Barbara Bush: “I know who you are; call me Barbara.”

Powell: “Ma’am, if I called you Barbara, my mother would kill me.”

Then Powell, who in 1989 also was named by H.W. Bush as the first black chairman of the Joint Chiefs of Staff, reflected on the above episode: “And that’s the way it was for the rest of her life.”

That was H.W. Bush’s better half.

Add the other half — the 41st president — and we witnessed a 73-year marriage, the longest of any U.S. president. Seventy-three years — amazing.

Now add this bit of information that emanated from a panel discussion analyzing a national survey focusing on family and marriage that ironically was held at the Brookings Institution, a non-partisan think tank the morning before the announcement of H.W. Bush’s death: Republicans in today’s world are 17 percentage points more likely than Democrats to be married.

The survey was directed by two political science professors at Brigham Young University — Christopher F. Karpowitz and Jeremy C. Pope, both of whom led the panel discussion for an audience of about 150 that Friday morning.

“No one is really anti-marriage,” Karpowitz said, “but there are some cultural differences between Republicans and Democrats. Democrats aren’t hostile toward marriage, but they are less likely to be married.”

He added regarding the annual survey, “Some of this has to do with age; Democrats tend to be younger. The other big thing is that among Republicans, being married is a strong step in life — a critical step. They see that legalized bond as necessary. Democrats talk more about being in a committed relationship.”

Ironically, acclaimed presidential author Jon Meacham was set to deliver a long-ago scheduled guest preaching on the morning of Dec. 2 at the Washington National Cathedral. Little did we know beforehand that Bush would die 36 hours before Meacham’s appointment in the cathedral pulpit.

Remember, Meacham wrote the most recognized biography on Bush: “Destiny and Power: The American Odyssey of George Herbert Walker Bush” — released in 2015.

The Pulitzer Prize-winning Meacham began his cathedral sermon before about 1,000 eager listeners with a few paragraphs acknowledging Bush the public servant. He told us that morning: “We gather here in the shadow of the passing of a great man — George Herbert Walker Bush. Naval aviator. Oilman. Congressman. Ambassador. Party chairman. Envoy to China. Director of Central Intelligence. Vice President. And 41st president of the United States.”

Then Meacham recited the prayer that Bush composed and delivered during his 1989 inauguration speech:  “Heavenly father, we bow our heads and thank you for your love. Make us strong to do your work, willing to heed and hear your will, and write on our heart these words: Use power to help people. For we are given power not to advance our own purposes, nor to make a great show in the world, nor a name. There is but one just use of power and it is to serve people. Help us remember, Lord, Amen.”

Republicans are more tethered to prayer and religion than some other political parties, noted Karpowitz, saying: “Republicans tend to be more into formal religious traditions.”

Though the Bush union lasted a record 73 years among presidents, Jimmy and Rosalynn Carter aren’t far behind. Jimmy Carter married Rosalynn Smith after he graduated from the U.S. Naval Academy in 1946. That’s mere months after WWII. And they are still vibrant Democrats. Carter (the 39th president) also is 94, the same age as Bush at his death.

We’ve seen marriage longevity with the Carter and Bush couples, despite their different political affiliations. As Karpowitz explained, when it comes to family structure, today’s Democrats and Republicans also tend to be on the same page regarding children. “Both groups agree that children are best raised in the context of marriage,” he said.

Adding, “Married couples tend to be more stable than couples that just cohabitate. There are practical benefits to being married, such as greater stability and better economic conditions. Republicans tend to talk more about the benefits of marriage than the downside of marriage.”

And what about today’s youngest surviving president?

Karpowitz responded, “Barack and Michelle Obama could approach that Bush longevity. They are younger and probably healthier. And will benefit from today’s advances in medical technology.”

As the Very Rev. Randolph Hollerith, dean of the Washington National Cathedral, said in conclusion following Meacham’s sermon: “This loving couple has been united again.”