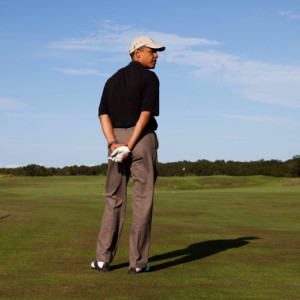 It’s officially summer vacation time in Washington, with Congress on August recess and President Obama set to spend more than two weeks on Martha’s Vineyard with his family.

And it’s fine — no one begrudges the commander in chief a little rest and relaxation, rejuvenation or restoration. Except, of course, the people who do.

From the get-go, the first family’s Vineyard visits have been the target of tiresome criticism. Much of it’s petty partisanship. Some of it’s lazy punditry. All of it’s overblown.

Gripes have ranged from the notion that the president is tone deaf for vacation during an international crisis to the idea that sojourning in a luxury locale makes him look out of touch and hypocritical — especially as he rails against economic inequality. In 2011, Politico even ran a list of vacations spots that might be “more politically suited to tough economic times.”

This type of hand-wringing isn’t unique to the Obama era either. George W. Bush caught flak for clearing brush on his Texas ranch and vacationing more than any other president in modern times. Bill Clinton’s concern about appearing disconnected from Average Americans™ actually led him to ditch Martha’s Vineyard in 1995 and 1996, instead retreating to Grand Teton National Park in Wyoming. (Of course, as the Washington Post points out, the president “allegedly ‘hated’ hiking, fishing and camping even if it did help his poll numbers.”)

How about we cut these guys a break?

As American Prospect columnist Paul Waldman wrote last year under the headline “Why It’s So Idiotic to Complain When the President Takes a Vacation,” everyone acknowledges that “time off” is a misnomer for a president anyway:

He travels with a significant staff, is in communication with the White House constantly, and of course has close access to the nuclear “football,” should it become necessary to end all life on planet earth at a moment’s notice.

Besides, why wouldn’t we want our presidents reaping the benefits of a healthy activity that has been proven to increase productivity in the workplace?

Part of the context here is that, as Americans, we don’t value vacation time for ourselves. According to a study by the U.S. Travel Association, which admittedly has a stake in all of this, more than 40 percent of U.S. workers aren’t using all of their allotted time off. Research by the travel website Skift even found that “nearly 42 percent of Americans said they didn’t take a single vacation day during 2014.”

There are a variety of reasons for this phenomenon. The U.S. is the only advanced economy that doesn’t guarantee paid vacation time. Low-wage and part-time work tends not to come with generous amounts of time off.

But again, many of us are opting of vacations we could be taking. The travel association describes “work martyrs” who fear losing their jobs and believe no one else can do their work while they’re away. That helps explain why, as the RAND Corporation reports, “More and more, Americans check their email, take calls and work while on vacation.”

One vacationing American who’s definitely working this week is Vice President Joe Biden. He’s on Kiawah Island in South Carolina, reportedly making a final decision about whether to seek the White House in 2016. It’s an important deliberation, to be sure. It hardly sounds relaxing.