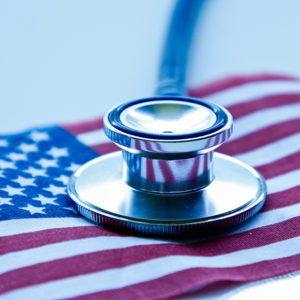 In October, the University of Virginia’s Adam Smith Society invited me to debate the topic, “Healthcare Access and Affordability in the Age of COVID-19: More Regulation or Less?” I took the “less” position, and David Kendall of Third Way took the side of “more.”

I paraphrased Shakespeare: “To regulate or not to regulate? That is the question.” But in fact, the remainder of my comments suggested that this is not at all the question. And the simple binary “more” or “less” doesn’t quite capture the truth, either.

How do we BEST regulate healthcare? THAT is the proper question. As I noted repeatedly, my view is that, on net, we would benefit today from somewhat less regulation, but also from smarter regulation. And part of “smarter” involves rethinking which tasks best lie with the federal government versus state governments versus private institutions.

It’s a remarkable moment in which to ask this question. We’re nearing a full year into the COVID-19 pandemic. That’s long enough that we can begin looking backwards to see what this crisis tells us about the proper role of governments in our healthcare system.

The remarkable thing about the pandemic is that it violently hurled the country into a series of experiments involving less regulation and, I would argue, smarter regulation.

For example, pre-COVID-19, many or most states placed great restrictions on the use of telemedicine — which, in simple terms, is the remote provision of medical care via electronic communications.

Pre-COVID regulations limited who was entitled to provide remote medical services, which services were allowable, when they were allowable, which modes of communication could be used, where the patients had to be located, how secure the electronic link had to be, and whether a nurse or other professional had to sit with them during the encounter.

In most cases, the encounters had to come from physicians licensed in the patient’s state of residence.

Over the years, I’ve given many talks on telemedicine and written many articles on the subject. Physicians and other healthcare providers in the audience were often aghast at, or at least highly skeptical, about the safety and value of telemedicine. Heavy-duty regulation was popular.

COVID-19 forced their hands, though.

Telemedicine became the preferred method, and sometimes the only method, for connecting doctors and patients. Longstanding regulations were jettisoned en masse — at least temporarily. And so far as I know, there have been few ill effects. Patients don’t seem to be dropping dead for want of an in-person visit or from using an out-of-state telemed doctor.

Admittedly, these are my casual observations—not the findings of rigorous scientific observation.

But we’re now accumulating sufficient data to test the veracity of such observations, and in the coming years, healthcare researchers will fill their days with analysis of the data.

Part of this research will involve hard looks at which regulatory structures succeeded, and which failed. I suspect that some state regulatory actions will look very poor in hindsight; New York’s mandate that nursing homes accept COVID-19 patients is the most obvious such example.

No doubt, reviewers will scan the actions from the White House, from the whole range of federal agencies, from state agencies, and from local health departments. The answers won’t be crystal-clear, though they will suggest some changes.

Recently, I spoke to a friend who had been a central figure in federal healthcare policy and who had managed health services for an entire state. Someone had asked whether he might procure a high-ranking public health official from Washington to speak to an event in the Midwest.

His answer was that it would be better to invite the head of some Midwestern city’s public health division. Since the earliest days of America, he said, public health has been highly decentralized. The intimate knowledge and the greatest capacity to act reside at the local level. Researchers will examine whether that proved true during COVID-19 and whether that is desirable.

As the data flow in, the most important tool in the quest for smarter is to keep an open mind — to listen to varying opinions, to observe the evidence, and then to observe some more.