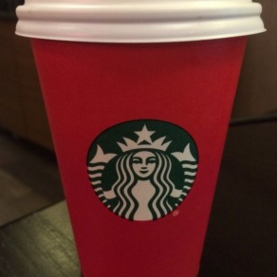 The cup at the center of the "controversy."
News

For Some, ‘War on Christmas’ Flap Is Tempest in a (Starbucks) Coffee Cup

There were, it must be said, many signs of normalcy at the Starbucks in Washington’s Tenleytown neighborhood Tuesday morning. Coffee brewed. Customers came and went as usual. Some even sat with their laptops, as if nothing had changed.

But as gentle rain fell outside, and caffeine-craving capital denizens shuffled through the doors, InsideSources confirmed that something other than coffee was percolating: the great debate over Starbucks’ holiday cups — the year’s first battle in the so-called “War on Christmas” — had arrived like a Shady Grove-bound Metro train in the upper reaches of the Red Line.

Employees were chatting about it, among themselves and with their patrons. One man waiting for his Flat White marveled at how it “got people talking.”

The issue, for those readers unaware of such epoch-defining cultural controversies, is that Starbucks decided against including snowflakes, ornaments or other seasonal iconography on its red holiday cups this year. The news may not have bothered the vast majority of Americans, including most of those on the right, but it set off alarm bells in some conservative precincts, ultimately earning coverage from mainstream media outlets like the New York Times and the Washington Post.

The story originated in a viral Facebook video by an evangelical Arizona Christian named Joshua Feuerstein. In his Nov. 5 clip, titled “Starbucks REMOVED CHRISTMAS from their cups because they hate Jesus,” Feurstein celebrates how he convinced his barista to write a yuletide greeting on his cup — and thus struck a blow against political correctness — by saying his name was “Merry Christmas.”

“So guess what, Starbucks? I tricked you,” he says. “And I’m challenging all great Americans and Christians around this great nation. Go into Starbucks and take your own coffee selfie. And then, I challenge you to not only share this video so that the word gets out, but let’s start a movement, and let’s call it … #MerryChristmasStarbucks.” Feurstein then signs off, but not before offering viewers evidence of his conservative credentials: he’s wearing a Jesus t-shirt and carrying a handgun, which he claims to have brought with him into to the coffee shop.

Feuerstein’s video, which had been viewed more than 15 million times Wednesday, soon migrated into the news media, which has handled it with an admirable amount of perspective. The conservative press doesn’t actually seem that outraged — Brietbart’s post calling the cups “emblematic of the Christian culture cleansing of the West” can be read as tongue-in-cheek — and writers of different ideological stripes have churned out some good think pieces.

At the Federalist, Mollie Ziegler Hemingway reviewed how capitalism, not the left, was what drained Christmas of its religious meaning in the public square. She also had a brilliant take on the very real “War on Advent.”

For the Week, Paul Waldman noted that “War on Christmas” outrage “actually comes from a loss of privilege,” as Christian cultural dominance decreases in a country of increasing diversity.

That kind of reckoning may come in time. Just last week, Pew Research Center concluded that the United States is becoming less religious: “An extensive new survey of more than 35,000 U.S. adults finds that the percentages who say they believe in God, pray daily and regularly go to church or other religious services all have declined modestly in recent years.”

This kind of change portends future conflict, especially given the rise of the “nones” — what Pew calls “the growing minority of Americans, particularly in the Millennial generation, who say they do not belong to any organized faith.”

In Tenleytown on Tuesday, it was a millennial who told InsideSources she thought the Starbucks “controversy” was overblown. While a middle-aged man a few feet away said the company “took the political correctness a little bit too far,” American University graduate student Alexa Banda was having none of it.

Banda, whose Facebook feed is full of friends mocking the #MerryChristmasStarbucks campaign, said people should focus on more important things: “I mean, it’s just a cup, right?” she asked earnestly.