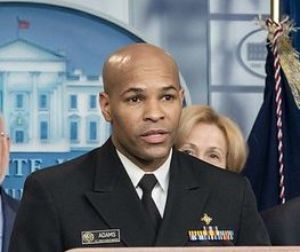 For Surgeon General, It’s About Who’s the Boss

During one of the recent daily White House press briefings on the coronavirus, Adams went rogue when speaking about the disproportionate effect of the disease on black and Hispanic populations.

Adams’ response went viral, as he was criticized for his ethnic word usage and some listeners interpreted that he was suggesting that black and Hispanic folks’ susceptibility to the coronavirus was self-inflicted.

Then, the caustic name-calling, angry posts and sarcastic memes by black folk especially went full monty, as social media lit up like the Fourth of July. One vicious anti-Jerome Adams post read this way, apparently from a black person:

“Funny Uncle Tom was able to discuss COVID-19 and systemic racism a week before on BET, but when ‘Massa Trump’ was listening he says you darkies better stop drinking, drugging and playing dice down at the juke joint. Jerome Adams is a spineless coon.”

And here’s one in apparent support of Adams, the nation’s top doctor: “The left will always destroy a black conservative no matter what. It’s disturbing. The Jerome Adams fiasco shows us they don’t care how accomplished a black man is. If he’s a conservative, he’s a c00n, idiot, sellout etc. Dr. Carson is a freaking brain surgeon & they call him stupid.”

The postings went on and on.

Suppose Adams had made similar comments while serving in the Barack Obama administration instead of the Donald Trump regime. What do you think would have happened on social media?

We say probably nothing.

In fact, Adams likely would escape mass ostracism even if he served under presumptive Democratic nominee and Obama vice president Joe Biden.

Remember, Obama sometimes went rogue vernacular himself when speaking about “Pookie” and “Ray Ray.” Two black ethnic stereotypes, as he used comical characters from the old neighborhood as an incentive to implore black folk to vote.

And note that, on Saturday night, in a taped video appearance for the CNN special telecast “The Color of COVID,” NBA great/entrepreneur Magic Johnson also chided black folk, saying, “African-Americans are leading in death from the coronavirus.

Notice Magic spoke specifically about the party scene, which is most telling.

So, should Magic be assailed for possibly implying that all black people do is attend parties, whether in cars or backyards or house basements? Obama didn’t suffer any recrimination; and neither will Magic from that high-volume black critics’ corner.

But Adams, who also has Hispanic relatives, was reamed and creamed.

Obama went all-stereotype in October 2014 in Maryland, spouting, “You’ve got to get that Cousin Pookie sitting at home on the couch — he’s watching football right now instead of being here at the rally — you’ve got to talk to him and let him know it is not that hard to exercise the franchise that previous generations fought so hard to obtain.”

“Your Cousin Ray-Ray’s sitting on the couch,”  Obama told a Michigan gathering in October 2008.

While Obama drew visceral chuckles from black people, Adams was smacked with raw disdain. While Obama was viewed as a black president aiming to make an anecdotal point, Adams was castigated as an obsequious subordinate trying to appease white supremacy.

While Obama’s comments were categorized as being “down home,” Adams was diagnosed as an out-of-touch black dude married to a blond, white woman.

When we viewed photos of Adams’ wife and family circulating on social media, we saw these strident reactions…

“POST CIVIL RIGHTS UNCLE TOMS are almost always highly educated Republicans and married to white women. I do not fault anyone(’s) choice of a mate but must point out the fact they seldom have black wives. Other TOMS of Jerome Adams ilk include Clarence Thomas and Ben Carson.”

And this post: “Frying Chicken and serving ice tea for Donald Trump!! This clown azz got him a white wife, funny looking kids and won’t come in the south side for nothing.”

So, what does all of this tell us?

That Adams probably would have been let off the hook if he would have uttered the word “racism” as a factor in black folk dying from coronavirus at a higher rate than white people, especially in major urban areas. Even if he didn’t mean it.

That Adams would have gotten off scot-free in a Democratic White House.

As for his admonishments to black folk about cigarettes, drugs and alcohol, perhaps Adams simply was issuing an educational caution flag. That is, many black people are already prone to coronavirus infection because of very common pre-existing factors afflicting them at a markedly high rate, such as diabetes, heart disease, asthma, obesity.

Therefore, high-risk determinants, including smoking, illegal drugs and heavy drinking, should be avoided. So, what’s the problem here?

Instead, the U.S. surgeon general finds himself in an unwanted category in the Age of Corona: socially at risk.

At least in some sectors of the black community.