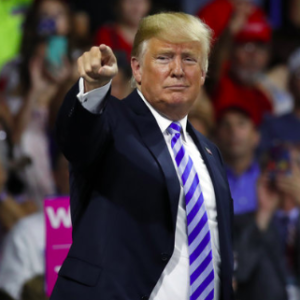 For Trump’s GOP, the Winning Never Ends. Even When They Lose.

McKay Coppins at The Atlantic shares the following anecdote:

“Shortly after news outlets began officially projecting that Republicans would lose control of the House of Representatives Tuesday night, I emailed the GOP strategist Brad Todd to ask why he thought his party had lost.

‘Lost?’ he responded, almost immediately. ‘What are you talking about? We may have our largest Senate majority in history.’”

Todd was overly optimistic about the Senate, but he certainly wasn’t alone. From Rush Limbaugh on the radio to the rank-and-file GOP, Republicans are being confronted with one of the worst losses for their party since Watergate—and they feel great about it!

According to a Huffington Post/YouGov poll released this week, 68 percent of voters who backed a GOP candidate for the House are “at least satisfied with the way the election played out nationally, and 60 percent by the results in their own area. They are also, by 45 percent to 10 percent, more likely to consider themselves to be winners than losers.”

In New Hampshire, where the Blue Wave crashed with particular force, Republicans are largely in denial despite the fact that they lost everything except the governor’s mansion: Both houses of the state legislature and the state’s Executive Council (sort of a state level Board of Directors).  The Democrats also held onto both Congressional seats without breaking a sweat.

But instead of bemoaning a midterm massacre, Granite State Republicans are talking about how close they came to holding on.

“We were only 250 votes away from a 12-12 split in the state senate,” NHGOP Comms Director Joe Sweeney told InsideSources.  “And we lost 35 House seats by around 100 votes or so. We’re just 4,000 votes away from a GOP legislature!”

This is the sort of happy talk heard from many GOP quarters in the wake of an election that turned out badly for Republicans and yet, as more late results come in, continues to get even worse.

A quick glance at the scoreboard tells the real story:

The GOP lost at least 33, and perhaps as many as 40, seats in the U.S. House. They also had the worst popular-vote performance for any party in power since the Democrats’ 1994 disaster under Bill Clinton.

Yes, the GOP picked up two seats in the U.S. Senate—assuming they stop “finding” votes in Broward County, FL—but Democrats were defending 10 seatsin states President Trump won just two years ago. Republicans couldn’t win deep-red Montana or West Virginia—and the GOP is so worried about the possibility they might lose the runoff in Mississippi next month that they’re sending another $1 million in TV money.

Meanwhile, Republicans held just two Senate seats that were competitive—Arizona and Nevada—and managed to lose both, while a Democrat came within 3 points of winning…in Texas.

Republicans lost seven governorships and control of seven legislative bodies, not to mention around 350 legislative seats.

And it’s not just where Republicans lost, it’s who.

For years, Republicans were the party of college-educated voters. In 1994, the GOP held a 54-39 percent advantage among college grads. In 2018, the GOP lost them outright. They lost college-educated women by twenty points.

Losing voters under 30 isn’t unusual for Republicans, though Democrats don’t usually get 67 percent of the vote like they did this year. (George W. Bush only lost them to John Kerry by about 8 points). But losing the 30-44 year-olds, and to lose them this badly—58-39 percent? That’s new.

So, did Republicans really lose? Or is that just #FakeNews?

“Yes, they lost,” the Weekly Standard’s David Byler told InsideSources. “This was bad.  There’s no way to spin this as a positive for Republicans. This wasn’t a good midterm by any honest or objective analysis.”

“Think about it,” Byler said. “If this happens in 2020—if we go into Election Day with Democrats up +7 and we have this result–it will be viewed as an unmitigated disaster.”

Ah, but it isn’t 2020, many Republicans will say. “This was a JV game,” says economist and former Trump advisor Stephen Moore.  It’s 2020 that’s the big game. And Trump has to be viewed as the favorite right now. Just having ‘Speaker Pelosi’ is a godsend,” Moore told InsideSources.

As for why Republicans aren’t worried about the midterm losses, “Republicans are just relieved it wasn’t worse. We knew we were going to lose the House—I thought there was a real chance we might lost the Senate—but we survived. It might be naïve, but Republicans feel like they’re in decent shape for 2020,” Moore says.

What he means is that Republicans feel like President Trump is in decent shape. That Trump’s connection with rural and blue-collar voters in the Great Lakes states like Michigan and Wisconsin will be enough to win them back again. And that two years of Schumer, Pelosi and Ocasio-Cortez will scare suburban women once again into the GOP fold.  And they might be right.

But there are also (at least) two more years of the same Trumpism that cost Republicans these votes in the first place.  Yes, Republicans turned out in droves for this midterm, but Democrats turned out in even bigger droves.  And in many places, like New Hampshire, local Republicans were swamped by the record amounts of money inspired by anti-Trump passions and spent by Democrats to defeat them.

“People say Trump was on the ballot symbolically, but he wasn’t actually on it. He will be in 2020, and that’s going to make a huge difference,” Moore says. And it might.  But why wouldn’t it make just as much difference to the people who hate him as those who love him?

And with a president whose approval rating is stuck in the low 40s, there are more of the former than there are of the latter.