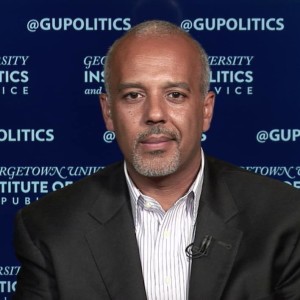 Mo Elleithee, executive director of the Georgetown Institute of Politics and Public Service, served as communications director for the Democratic National Committee from August of 2013 until June of this year.
News

For years, Democratic Party leaders have attacked Republicans for waging a “war on women.” Now a former spokesman for the Democratic National Committee — and Hillary Clinton’s 2008 presidential campaign — is denouncing that rhetoric as “overly incendiary,” “not true,” and part of why Americans hate politics.

Elleithee made his comments at an event for Georgetown University’s Institute of Politics and Public Service, which he’s run since leaving the DNC in June. The longtime Democratic operative later told InsideSources that Republican policies are bad for women, but “overly hyped” political language turns voters off.

Elleithee doesn’t think he used the phrase “war on women” during his tenure at the DNC, which began in August 2013. (In fact, he started distancing himself from the term years ago.) Still, there’s no question the language has been part of the Democrats’ national messaging.

Elleithee’s predecessor as the party’s communications director, Brad Woodhouse, told Slate he was “not a fan of the term” after it caused controversy in April of 2012, but admitted he’d “probably used it.” DNC chair Debbie Wasserman Schultz used it repeatedly starting in March of 2011, and the Florida congresswoman has continued to raise eyebrows with similar inflammatory rhetoric.

Just last year, she compared Wisconsin Gov. Scott Walker’s policies to domestic abuse, saying Walker had “given women the back of his hand.”

“I know that is stark. I know that is direct. But that is reality,” she said. “What Republican tea party extremists like Scott Walker are doing is they are grabbing us by the hair and pulling us back.”

Those remarks sparked massive backlash, including from many Democrats, and Wasserman Schultz later said she should have chosen different words.

Another of Elleithee’s former bosses used some fairly harsh language about Republicans and women this year. Democratic presidential front-runner Hillary Clinton, for whom Elleithee was a senior spokesman in 2008, criticized congressional Republicans in March for a “trifecta against women.” (The former secretary of state was upset by delay over Loretta Lynch’s nomination to be attorney general and the state of a human trafficking bill held up by an abortion provision.)

Clinton also compared Republican attitudes about women to those of terrorists.

Elleithee acknowledged he’s guilty of using inflated language in his career, and said he’s “not proud of that.” He even called himself “one of the guys who broke the [political] system.”

Through his work at Georgetown, he hopes to help the next generation of operatives use better rhetoric, maintaining a passionate partisanship while draining some of the poison from today’s politics.