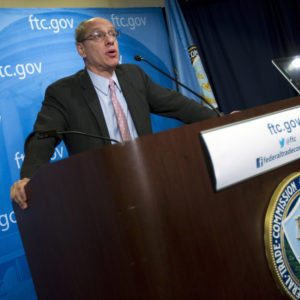 Posted to Technology May 25, 2016 by Giuseppe Macri

Jon Leibowitz, FTC Chairman from 2009 to 2013 and a partner at law firm Davis Polk and Wardwell, submitted comments to the FCC Monday on a Notice of Proposed Rulemaking the agency advanced in March to make ISPs obtain consent from their subscribers before monetizing their data.

“Parts of the FCC’s proposed rule are consistent with the FTC approach,” Leibowitz said. “However, in many important areas it overshoots the mark, proposing regulations for broadband providers that go well beyond those imposed upon the rest of the Internet economy and which, if adopted, undercut benefits to the very consumers it seeks to protect.”

The proposal — an outgrowth of the agency’s net neutrality rules — usurp jurisdiction previously held by the FTC, which oversaw ISPs and their privacy standards before the FCC’s 2015 Open Internet Order reclassified ISPs under the same common carrier designation as telephone providers.

Under FTC jurisdiction, ISPs were regulated under the same case-by-case standards as edge providers like Google and Facebook — an approach ISPs and others in the industry encouraged the FCC to adopt.

Wheeler initially said the FCC would craft rules “consistent with [the] FTC’s thoughtful, rational approach,” leading many in the industry to claim surprise when the agency announced stipulations like a default opt-in consumers must select before ISPs can share their data with third parties.

“FCC rulemaking consistent with the FTC’s privacy framework would ensure that privacy enforcement remains technology neutral, based on the type of data being collected and how it is used, rather than turning on the type of entity collecting the data,” Leibowitz said.

If adopted, the proposal would limit data monetization for ISPs compared to the rest of the Internet ecosystem, including targeted advertising giants like Google and Facebook, at a time when ISPs are seeing more fragmented and overall less consumer data than their edge provider counterparts.

According to Leibowitz, the limitation will eventually undercut ISP revenues to the point where they’ll have to raise prices on consumers to make up the difference, undermining the core FCC mission of expanding broadband adoption.

“For example, they would prevent any ISP from offering its own branded home security system to its existing customers without their advance permission,” the former FTC chair wrote in a Fortune op-ed. “The rules would further subject all ISPs — and ISPs alone — to unprecedented compliance costs and keep them from efficiently monetizing online data in the same way that Google and Facebook have long done, with astounding consumer benefits.”

The FTC mandates websites provide an opt-out from data tracking in almost all cases, while the FCC’s reverse opt-in “without regard to the sensitivity of the data used in tailoring and advertising” could “stifle innovation and competition in the online advertising marketplace,” Leibowitz’s filing reads.

Earlier this month, one of the FCC’s Republican commissioners said the proposal would do little to actually protect consumer privacy, a point the former FTC chair echoed.

“Ironically, the proposed rules would do very little to promote the cause of ‘privacy’ in the first place,” he wrote. “If they are adopted, all other participants in the Internet ecosystem will remain exempt, will continue collecting all of the same information that the ISPs would have collected, and may continue selling the same information as before to the same data brokers.”

“Removing the exception from the FTC Act would enable the FTC to bring its extensive law enforcement experience to bear in protecting consumers of common carriage services against unfair and deceptive practices in the same way that it can protect against unfair and deceptive practices for other services,” Ramirez testified before a House Energy and Commerce subcommittee.

The Protecting Consumers in Commerce Act of 2016 — one of several FTC bills the committee discussed Tuesday — would allow the two agencies to share jurisdiction over ISPs.

“Although the FCC would retain its jurisdiction over common carriers, consumers would benefit from the FTC having shared jurisdiction because the enforcement provisions of the FTC Act provide for consumer redress,” she said.