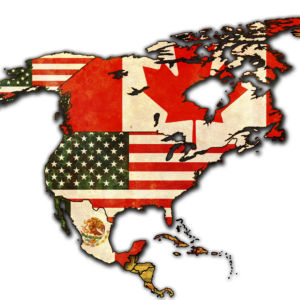 The former head of a major union expressed his optimism Tuesday that a contentious trade deal will soon be renegotiated to better serve working class people.

President Donald Trump has already started the process of renegotiating the North American Free Trade Agreement (NAFTA). The president broke with many others on the right by criticizing current trade policy. His criticism became one of the few areas the president and unions found common ground on.

The Communications Workers of America (CWA) is among the major unions that have taken a firm stand against NAFTA. The union joined other activists to protest against the trade deal outside the U.S. International Trade Commission on Tuesday. Former CWA President Larry Cohen expressed his hope for a new and better NAFTA.

The CWA was joined by a small crowd of activists sporting posters and union gear. Democratic Rep. Rosa DeLauro of Connecticut and Public Citizen’s Global Trade Watch Director Lori Wallach also spoke during the rally. Activists were gathered around the main entrance as employees were walking into work.

Trump made working class issues a cornerstone of his campaign for the presidency. Immigration and international trade became major components of his agenda with concern cheap foreign labor is undercutting American workers. He has pledged to review trade agreements so they better serve domestic workers.

Trump has already delivered on one major campaign promise by withdrawing from the Trans-Pacific Partnership (TPP). The president was able to unilaterally withdraw from the deal because it never received a final congressional vote. Congress had delayed holding a final vote on the trade deal with it becoming a key debate during the election.

The agreement would have been the largest regional trade deal in history at roughly 39 percent of global GDP. Former President Barack Obama was unable to get much support from fellow Democrats when trying to get the deal implemented.