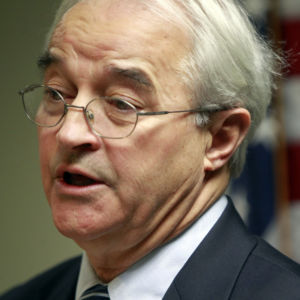 As the year passes, New York Attorney General Eric Schneiderman’s case against ExxonMobil grinds on, slowly drawing in a broader circle of state officials outside of New York with questionable ties to the case. On Wednesday, Bill Sorrell, Vermont’s longest-serving Attorney General, was due at the courthouse in Burlington, Vermont. Sorrell’s term ended in 2016, but he remains part of the lawsuit. He failed to appear for a deposition ordered by Energy & Environment Legal Institute (E&E Legal), a non-profit group engaged in litigation and public education on energy and environmental issues.

Sorrell is included in E&E Legal’s litigation against the Vermont Attorney General’s office. The deposition was an attempt to gain access to emails Sorrell is believed to have sent on a personal account during the legal probe into Exxon’s finances. E&E Legal is looking for emails Sorrell sent to Schneiderman discussing Schneiderman’s investigations into the Exxon case.

“Any first year law student understands you cannot ignore basic civil procedures like skipping a deposition if you are compelled, simply because you would prefer not to participate,” said E&E lead counsel Matthew Harding, in a statement. “When you consider the fact that the individual in question is the former attorney general of an entire state, his failure to ignore the very rules he spent twenty years enforcing is unfathomable.”

This is not the first time that Sorrell has attempted to avoid disclosing information about his tenure as attorney general. Previously, Sorrell had argued that the documents were covered by attorney-client privilege. Counsel for the Vermont Attorney General’s office also argued this spring that the office was exempt from the record-keeping laws that bind other state offices. As result, they can consider the presumed motives behind a record request from an outside group when deciding whether or not to release documents.

E&E is continuing to pressure the office for more information on the lawsuit.

The developments come even as the science underlying climate change is increasingly coming into question. As Sorrell and others are being called to testify about the underlying motivations behind their lawsuit against ExxonMobil, new developments in the science of climate modeling are causing some to rethink scientific assumptions.

On September 18, researchers from Oxford University published an analysis in Nature Geoscience suggesting that climate researchers had been underestimating the amount of atmospheric carbon compatible with the goals of the Paris Climate Agreement. According to Richard Millar, a post-doctoral research fellow at the Oxford Martin Net Zero Carbon Investment Initiative, and his colleagues, the “budget” of emissions needed to keep global temperature increases under 2 degrees would allow for the emission of a great deal more carbon dioxide than had been previously thought.

One of Millar’s co-authors worked on some of the calculations carried out by the Intergovernmental Panel on Climate Change, which became the foundation behind some of the Paris agreement’s carbon targets and budgets. After temperature readings failed to match the model’s predictions, despite slightly elevated carbon levels, the team went back to rework some of the foundational presumptions of the climate modeling.

Instead of attempting to scale global temperatures and carbon emissions off of a base year of 1870, when much of the world had yet to industrialize and measurements of carbon emissions require a fair amount of guesswork, the Oxford team re-calibrated the results so that they centered on 2015, a year during which temperature and emissions data was readily available. The second set of calculations could emit about 750bn tonnes of carbon dioxide from 2015 onward and still be “likely,” according to the definitions of the IPCC, to keep warming below the 2C mark. Millar’s team verified their underlying presumptions by running the algorithm against other points in the recent past, showing that it was able to predict the measured results.

The Oxford group’s conclusion that strict carbon reduction measures were not necessary to limit the speed of global warming has sparked heated debate in both policy and scientific circles. At this point in time, the full impacts of their discovery remain to be seen.