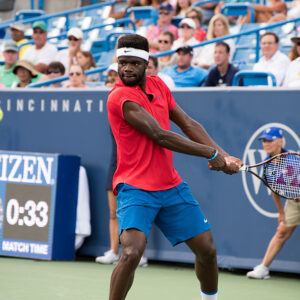 Frances Tiafoe and the Incoherence of Universal Representation

How many Black tennis players does the country need before commentators focus on Frances Tiafoe’s merit before analyzing his race?

The No. 1 issue among the likes of the New York Times and other prominent outlets seems to be that Black players are not proportionally represented in tennis. Tiafoe’s stellar performance in the U.S. Open, they’d argue, is compelling not because of his success at a young age but because there just aren’t very many Black tennis players.

The Times called Taifoe the “latest hope for the rise of Black men in tennis” and lamented that there are not more Black men playing tennis at his level.

So what is the correct number of Black men in tennis?

There’s a contingent of Diversity, Equity and Inclusion (DEI) advocates who demand that every economic sector, sport and hobby mirror the U.S. census. In their opinion, it’s systemic racism or societal failure that fewer than 13 percent of U.S. tennis players are Black.

If we continue to follow the DEI demagogues down this path, it becomes clear just how insane the goal of exact representation is.

Should country music airtime be divided up so that 13 percent of the songs played are by Black musicians? Should each NFL team make space for an 18.7 percent representation of Hispanic players? What about the NBA and its lack of Asian players? Bridge? Pickleball? Pinochle? Will the disparities ever end?

It seems like a joke, but this is where the DEI movement is headed. Look no further than this pressing report about the “racial reckoning” of birdwatchers for proof.

Proportional representation of every race in everything is absurd. It ignores the obvious fact that children are influenced by their families and their communities and it is reflected in their hobbies. If everyone in your neighborhood gets together and plays basketball all summer, there’s a chance you’ll fall in love with the sport, too. But if you grew up in a family of bird watchers, that may be more appealing to you than chasing a ball.

So why do they care about representation?

There’s an argument that children need to see “someone who looks like them” in a position to believe they could do it, too.

But that’s not how the world works. I’ve been greatly inspired by the great Thomas Jefferson and the philosopher John Locke, and I don’t need to look like them to aspire to work like them. The same is true of young White athletes who are inspired by Tiger Woods or Frances Tiafoe or the young Black athletes who have been inspired by Tom Brady or Larry Bird. Or, for that matter, the young girls who find inspiration in male athletes.

If it were true that young people need someone to “look like them” to believe they can do something, we’d never have any “firsts.” Young players would simply give up trying.

Yet DEI activists — from corporate board rooms to the nation’s top newspapers — will keep hounding the issue because they believe it is proof that America is the racist evil country they’ve been told it is. They’ll force an office to “look like America” even if it doesn’t result in the best team. And until every office, arena or tennis court “looks like America,” they’re going to keep propping up the issue of racism — even if it may just be the case that fewer athletes want to play tennis or watch birds.

The truth is America isn’t a racist country, but a free country. That means athletes can choose to play whichever sport they like. Even if it doesn’t fit DEI’s quotas.