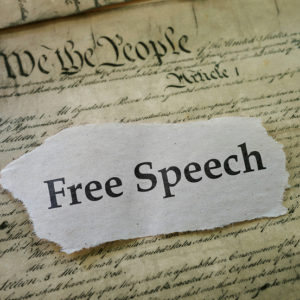 Fifty years ago, the Supreme Court upheld the right of a 13-year-old and her friends to protest peacefully against American involvement in Vietnam at their school.

The justices’ decision in the landmark free expression case Tinker v. Des Moines provided us with indelible imagery and a lasting statement about student free speech and symbolic expression.

In upholding the students’ decision to wear black armbands to school in 1965, the court reasoned, “It can hardly be argued that either students or teachers shed their constitutional rights to freedom of speech or expression at the schoolhouse gate.”

Fifty years after that moment, it is difficult to celebrate this benchmark ruling without a little disappointment. Tinker just isn’t what it used to be.

Years of Supreme Court decisions have undermined and confused the 1969 precedent, leaving student expression rights at a crossroads, even as justices have expanded safeguards for nearly every other area of free expression:

—Corporations and advertisers have found increasing amounts of protection.

—Safeguards for hateful, offensive speech, such as the ideas communicated by the Westboro Baptist Church, have been reinforced.

—Justices have struck down laws that limited flag burning, lying about military honors, and selling videos that depict animal cruelty.

Free speech in the public schools might just be the only area where First Amendment safeguards have narrowed, rather than expanded, in the past half century. It seems the court has hung Tinker out to dry.

In Bethel v. Fraser in 1986, the court concluded that a student’s speech, which was filled with sexual innuendos, could be limited. Justices explicitly stated their decision did not overturn Tinker, but they reasoned that administrators have a right to maintain the educational goals of the school environment.

This is a reasonable concern, but administrators have taken the “educational environment” rationale to extreme levels, halting expression rather than using it to teach students about civil discourse and the long-standing American value of protest and free speech.

Two years after Bethel, the court greatly narrowed student press rights in Hazelwood v. Kuhlmeier, providing school administrators the power to censor information students sought to publish in school media if it did not align with educational objectives. Many administrators have used the ruling as an excuse to censor student publications at whim.

An Arkansas high school suspended its newspaper and threatened to fire the adviser in December after students published a story that questioned whether the district had violated its own transfer policy when five football players switched high schools. A principal in Texas censored multiple student newspaper pieces last spring because they were “incorrect, not uplifting, and did not voice all 3,000 students at their school.”

In 2018, the Student Press Law Center, marking Hazelwood’s 30th anniversary, hosted a day of action and started the hashtag #curehazelwood.

Most recently, the court ruled against a student’s banner in Morse v. Frederick. Joseph Frederick, while not in attendance in school that day, joined his classmates on a public street along the Olympic torch run parade route. As the parade passed, he unfurled the large banner, which read “Bong Hits 4 Jesus.” The principal took the banner down and Frederick was suspended.

In a 5-4 decision, justices determined the banner, though Frederick said it did not mean anything, was a pro-drug message, which administrators had a right to limit.

Justices could have made this decision a turning point in the downward slide of student free expression rights. They could have chosen to emphasize that Frederick’s banner was displayed in a public forum, did not disrupt the educational environment, and that the principal, as a government actor, had halted his speech.

Justices, however, took another chunk out of Tinker.

The argument regarding student free expression rights is far from resolved.

As more and more issues become political and divisive, student free expression will continue to be a challenging topic. Earlier this month, for example, a school district in Wisconsin banned the Confederate flag from its campuses, citing the need to protect the educational environment.

New technologies are also complicating what constitutes the schoolhouse gate, as students use personal devices and social media accounts to threaten, harass and shame classmates in ways that have repercussions on campuses. Last spring, a high school senior in Alabama was given in-school suspension for criticizing administrators for not allowing students to take part in a walkout regarding gun-violence in schools. Does the school have the power to penalize student expression when its done on their own time on their personal devices?

Tinker remains a valid Supreme Court precedent — something justices can draw from in future rulings — and its imagery of the schoolhouse gate remains a compelling and commonly cited argument for student expression rights.

What Tinker lacks, and requires as it settles into middle age, is a renewed appreciation — from the courts, school administrators and parents — for what young people can contribute when they engage in matters of public concern and a recognition that safeguarding student speech is crucial to raising a generation that is not only aware of its rights, but knows how to exercise them.

Jared Schroeder is an assistant professor of journalism at Southern Methodist University — Dallas, where he specializes in First Amendment law. He is the author of the 2018 book “The Press Clause and Digital Technology’s Fourth Wave: Media Law and the Symbiotic Web.” He wrote this for InsideSources.com.