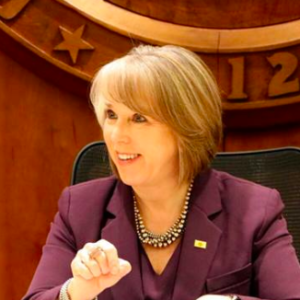 Lujan Grisham’s spokesman, Tripp Stelnicki, said the pay increases will help the government of the oil-rich state compete with a growing private sector.

“This administration believes if you want the best, you’ve got to pay for the best,” Stelnicki told the Albuquerque Journal.

These raises don’t sit well with the president of The Rio Grande Foundation, a free-market think tank.

“So, these wages are being handed out with little or no justification,” he said. “There are no benchmarks to indicate why these top-level officials would deserve these raises,” adding that “New Mexico . . . [remains a] deeply challenged place, including — but by no means limited to — being a difficult climate for businesses, that have been dragged along by the national economy and booming oil production.”

One “benchmark” might be to compare New Mexico’s new salaries to other, similar states. For example, the number of Cabinet members in nearby Oklahoma, also an oil-rich state — is twelve.  And seven of them are volunteers. In addition eight of the 15 Oklahoma Cabinet secretaries have never served in state government and come from the private sector, which counters the argument that higher salaries are needed to attract talent.

An exception is Oklahoma Secretary of Energy and the Environment Kenneth Wagner who earns $140,000, compared to New Mexico’s Secretary of Energy, Minerals, and Natural Resources Sarah Cottrell Propst who will earn $150,00 a year thanks to the raise.

The population of New Mexico is just above 2 million, about half that of Oklahoma. The number of Cabinet members is also approximately half. These numbers raise questions in the minds of opponents as to why New Mexico needs so many highly paid agency heads.

And while massive oil and natural gas production in southeast New Mexico has been a boon to state income providing an estimated $1.2 billion budget surplus for the current fiscal year,  state economists warn these revenues are contingent on global energy markets.

Gessing points to a study done in 2017, using numbers from 2016, to prove state employees are already paid far better than are private sector workers .Key Policy Data, which compiled the study and tracks and analyzes government data, wrote in December 2017: “Based on this state and local government workforce productivity index, New Mexico has the eighth least productive state and local government workforce in the country.”

It tweeted: “In 2016, New Mexico state & local #government compensation was 16% higher than in the private sector — the 16th highest ratio in the country and 21 percent above US average.”

“While we are assured that all of this is being touted as necessary to attract qualified people and ‘keep up with our neighbors,’ the reality is that New Mexico government workers are already paid far better than are private sector workers,” Gessing said.

“We are a government-driven state at the state and local level as well,” he said. “If times are good, it doesn’t matter what the political leaders of the state . . . are doing — whether they deserve the pay or not — and of course I don’t believe they have done anything to merit that very significant bump up in their pay.”