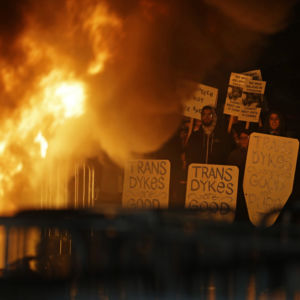 Protestors watch a fire on Sproul Plaza during a rally against the scheduled speaking appearance by Breitbart News editor Milo Yiannopoulos on the University of California at Berkeley campus on Wednesday, Feb. 1, 2017, in Berkeley, Calif. The event was canceled out of safety concerns after protesters hurled smoke bombs, broke windows and started a fire. (AP Photo/Ben Margot)
[IS] Opinions

What do you see in the news whenever outlets are reporting on free speech issues on a college campus? Protesters? Disgruntled students and professors of varying political ideologies? Administrators vouching to protect only certain types of speech? Violence against people who have differing opinions?

No matter what is being woven in the news media these days, the free speech climate on the American college campus is still a bleak one. Even under President Donald Trump’s promise to students to protect speech on campus, the efforts are limited at best.

In effect, the overall free speech climate and its current state can still be attributed to the major, multi-faceted narrative of anti-Trumpism and anti-hate speech mentalities. Simply, the system of tolerance and diversity created in the guise of social justice rhetoric and ideology has been counter-productive in ensuring a true sense of equality. Equality in the eyes of our laws and founding documents, that is.

This fight for free speech on campus has been seen in several states, as of late, in the form of legislative proposals that mandate that speech of all sorts is empowered on college campuses. One notable example of the recent legislative pushes at the state level that has received a lot of pushback from a consortium of opposition is the campus free speech bill before the Wisconsin legislature.

This bill would mandate the University of Wisconsin system to create an educational setting that fosters lively debate over emotionally charged repression of such things. Essentially, the bill provides students the opportunity to engage with campus guests and speakers who are deemed “controversial” without hindrance. And, as noted by the bill sponsors in an initial hearing, could give students the ability potentially to challenge, through disagreement, the tenured ivory tower that teaches them.

However, the Wisconsin bill has drawn criticism over two main components — the origins of the bill and the empowerment students are given. With instinct, the opposition wants to point the finger at where the bill came from to determine its “true” intentions. The particular bill is model legislation for several states, written by the conservative Goldwater Institute. Though a valid legislative proposal, opponents to the legislation argue that the bill will implode on itself because it only has the interests of right-wing students, professors, administrators and speakers in interest.

That is simply not the case; nevertheless, this sentiment contributes to the apparent fact that students who have differing opinions — differing from those of their professors and fellow classmates — should be disregarded. Combine those two arguments together and, from there, you can bore this type of mentality among easily impressionable college students to elicit and activate on their campuses.

In fact, it is arguable that some of the “radical” approaches to fighting and condemning what is characterized as hate speech is ultimately born from the students, more so than the professors and faculty members.

Intentionally, the college student is placed in a scenario where he or she is given the food for thought that their professors deem necessary for understanding complex social issues. Regardless, professors planting these seeds of impractical information with rudimentary real-world applications to point to as examples, the information will be misconstrued as possible.

That being said, I firmly believe that even though instructors and professors are given every enumerated right to argue and teach such things; the disconnect, though, is that ideas become actions and how actions play out are all at the design of the people pushing such actions.

Take the Anti-Fascist movements across the United States. The group has quickly become a public nuisance riddled in controversies of violence and scandal for the sake of protecting the world from the apparent rise of the next Benito Mussolini or Adolf Hitler. Where Antifa gets it wrong almost every time is its immediate, brutish mentality to physically hurt someone who disagrees with them. Rather than violent acts, they should engage in the civil discourse that people on all sides are craving. Moreover, this radical approach to fighting certain types of inflammatory speech is adopted by the college students and is viewed as an acceptable means of protest.

Until students actually realize the ability of outside factors and influences that college campus are subject to, the debate will be one of incivility. No, I am not arguing that protests, civil discourse or controversial speakers should be banned on campus to spare us violence. My argument is far from that. What is immediate, though, is that nothing is accomplished when a conservative student has his or her head bashed in for wearing a “Make America Great Again” hat.

The righteous are the ones who wish to engage with differing perspectives; not the ones willing to suppress. And, as demonstrated by groups fighting against legislation to open up campuses to wide-ranging, unhindered debate and the roving squads of violence, there is still no victory for free speech on campus. Incidents like the riots at UC Berkeley (the most prominent), from a few weeks ago, should not be where our universities are headed.

Mahatma Gandhi, the Gujarati-born leader of peace for many people of Indian decent, once said that “you must not lose faith in humanity. Humanity is an ocean; if a few drops of the ocean are dirty, the ocean does not become dirty.”

Drops of blood on the sidewalk outside a student unuon are merely that dirt. Academia needs the freedom to debate. Not the violence to restrain.