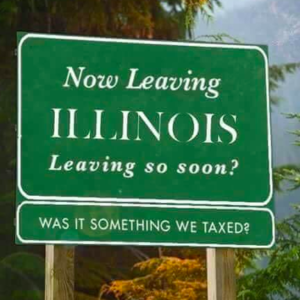 How lousy does public policy have to be for a state to lose population six years in a row?

Illinois is finding out. Connecticut, too.

More deaths, fewer births, fleets of fleeing moving vans, insufficient migrants from abroad and other states — the Lands of Lincoln and Steady Habits are hemorrhaging residents at impressive clips. According to new estimates by the U.S. Census Bureau, Illinois lost 212,672 people between 2013 and 2019. Connecticut’s drop was 29,237.

The state-and-local tax burdens in both places are among the worst in the nation. But governments do more than tax. Right-to-work laws, for example, have been shown to significantly boost competitiveness. Neither Illinois nor Connecticut protects private workers from forced union dues. Both aggressively reward government personnel, though. A 2014 study by the American Enterprise Institute compared state-employee compensation, including the value of job security, to “what similar private-sector workers receive.” The Prairie State’s differential was 32 percent. The Nutmeg State’s disparity was 56 percent — the highest in America.

It’s little consolation that one state performed even worse, losing population seven years straight. After all, there’s an easy explanation for West Virginia’s woes. Cheap natural gas and climate-change hysteria have crippled the coal industry. Since the number of West Virginia mines was slashed in half between 2008 and 2018 — and production fell 40 percent for the period — Mountain Staters are seeking their fortunes elsewhere. No such economic calamity has befallen Illinois or Connecticut. Their doldrums are self-inflicted.

New York and New Jersey have yet to reach the sad status of Illinois and Connecticut, but they deserve honorable mentions in tax-and-spend-and-regulate-your-way-to-depopulation “achievement.” The Empire Center’s recent calculations yielded dismal data: “New York has lost nearly 1.4 million residents to the rest of the country since 2010 — and largely as a result of this outflow, the … total population barely budged during the decade.” Matt Rooney, proprietor of the blog Save Jersey, laments the state’s “high taxes” and “unfriendly business climate,” and notes that a November poll revealed that 44 percent of his neighbors were “planning to leave … in the near future.”

New Jersey, Illinois, New York, and Connecticut nabbed the “top” outbound spots on United Van Lines’ 43rd Annual National Movers Study, “which tracks customers’ state-to-state migration patterns over the past year.” In 2019, inbound stars were Idaho, Oregon, Arizona, and South Carolina. Three of the four — The Beaver State didn’t make the cut — were also in the top 10 for population growth between 2018 and 2019.

Looking at the just-completed decade, Utah multiplied the most. Between 2010 and 2019, it increased its residents by 442,000 — “roughly the equivalent,” reporter Lee Davidson wrote, “of adding the combined populations of the state’s three biggest cities: Salt Lake City, West Valley City and Provo.” And don’t credit the state’s famously fecund Mormons with the increase. In November, The University of Utah’s Kem C. Gardner Policy Institute announced that the state’s “fertility rate began a precipitous decline during the Great Recession and has not recovered despite ten years of economic expansion.”

Texas, Colorado, and Florida followed closely behind The Beehive State in adding population during the 2010s. Of the four, only the Centennial State does not have a right-to-work law. Texas and Florida enjoy the added advantages of lacking income taxes. The only states to lose residents for the decade? West Virginia (naturally), Vermont, and — you guessed it — Illinois and Connecticut.

For Big Government defenders who consider the nation’s population shift nothing more than a flight from snow and ice, two words: New Hampshire. Holding the No. 1 ranking on the Fraser Institute’s “Economic Freedom of North America” and the No. 2 score on the Cato Institute’s “Freedom in the 50 States,” it wholly rejects its region’s deep-blue policy architecture. Nonetheless, its citizenry is growing, via relocations. Research by the University of New Hampshire’s Carsey School of Public Policy found that that “migration accounted for all … population gain last year,” because the state was “one of only four … in which deaths exceeded births.”