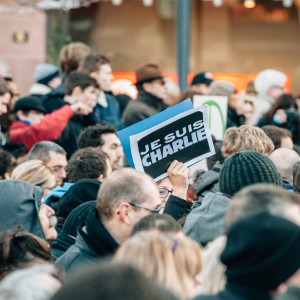 A unity rally in France following the attack on Charlie Hebdo

Why Freedom of Speech Matters

The recent tragedy at the Paris-based satire publication Charlie Hebdo thrust the issue of freedom of expression to the forefront of international debate. There was an outpouring of people adamantly defending free speech as a foundational principle to a healthy and free society. Much of the debate focused on the intersection between media law and media ethics. That is, just because it is legal to express certain ideas, should all material, including material intended to mock religious beliefs, be published and celebrated?

There is evidence that freedom of expression protections are positively related to increased economic growth, democracy levels, sociopolitical stability, and nonviolent methods of conflict compared to violent methods.

Political communication researchers have long deemed a free and developed media system as democratically essential.  In a democratic society, informed and engaged individuals weigh-in on societal affairs, making a free press instrumental. By and large, educating the public on matters of social and political concern falls to the media.

Freedom of expression contributes to the “marketplace of ideas,” a concept popularized by John Stuart Mill. Ideally, allowing individuals to voice diverse and even controversial ideas and opinions leads to desirable and vetted sociopolitical solutions. This permits people to air their grievances and works as a pressure release valve, helping to curb violent uprising by the population. The freedoms of the press propositions closely link media freedoms with democracy development, as well as sociopolitical stability.

In a 2014 World Bank research project, Sanjukta Roy found that in Sub-Sahara Africa, developed media systems that maintained higher levels of press freedoms linked to lower levels of political risk. In other words, countries that have freer media are less likely to experience violent political uprisings and transitions. In my dissertation research (forthcoming publication), I found that higher levels of press freedoms were strong predictors of sociopolitical stability across countries from 1980-2012 using the Freedom House press ratings.

In a 2008 UNESCO special report on press freedom and development, Gusevea et. al discovered relationships between press freedoms, militarization, (in)stability and violence. They found that press freedoms were more restricted in countries that spent more on military (the US an obvious outlier here). They also found that in countries that experienced more violence, journalists were more likely to be in danger, which influenced the media environment. “Generally speaking, in a State where public discussion exists and the media can deal freely with the problems of society, large-scale violence is not tolerated,” stated Gusevea et. al.

Peaceful political change is much more likely within countries that allow free speech. Freedom of expression contributes to holding the government accountable. A free press can expose political corruption, follow up on campaign promises, and report on policy performance. The systemic flexibility of democracies discourages sociopolitical instability and has a positive and significant impact on economic progress, which contributes to continued stability.

The research discussed here highlights the numerous benefits of freedom of expression within societies at the aggregate level. Free flowing ideas and debates contribute to creativity, innovation, education, and cultural evolution. In our interconnected globalized world, freedom of expression can and will cause cultural conflicts. The Paris attacks were a startling display of the potentially negative impacts of ideological clashes over free speech. Many of the world leaders who restrict free speech in their own countries stood in solidarity condemning terrorism as a way of reacting to expression that offends. There will be immense growing pains on a global scale as the world continues to wrestle with these issues. Nevertheless, if freedom of expression is protected and championed then the long-term societal benefits will be tremendous.