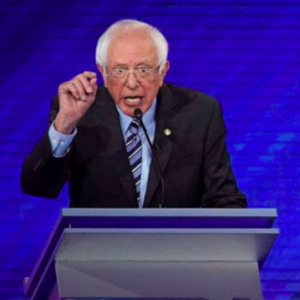 Frontrunner Sanders Gets It All Wrong

I can take Sanders’ passion, although it’s so consuming it gets to be frightening. I can take his calling himself a democratic socialist, although I don’t know to what extent his form of socialism pits him against capitalism. Enough, I fear.

Some of what Sanders had to say in Las Vegas was downright risible, or has been tried and failed, or, worse, would set in place a series of negative dynamics, damaging the country in many ways without bringing about any of the gains he wishes to achieve. Listening to him, I think, “This donkey wants his feedbag.”

In his way, Sanders is as committed to conspiracy theories as is Trump. Sanders sees vast, secretive forces in fossil fuel companies, lobbyists, bankers and billionaires as being united in a scheme to keep the rest of us poor and ill-served by government.

Here are three of his big fallacies:

1. Companies would be better if they were partly owned by the workers. This is real socialism and it hasn’t worked when it’s been tried.

Sanders would be well-advised to read up on the history of the cooperative movement in Britain. The very first casualty would be innovation because worker governance isn’t risk-taking.

I say this having been very familiar with the British co-op movement and having headed a trade union local, the Newspaper Guild, in Washington. Collective decision making is not creative, risk-taking or forward-looking.

2. The technology of fracking to extract oil and natural gas from tight rock formations should be stopped in order to combat global warming. That would deal the economy a body blow while doing nothing for global warming.

Carbon emissions from fossil fuels are coming down, and on the horizon is the technology of carbon capture, utilization and storage, and other technological fixes for carbon emissions.

Technology has enabled fracking, and technology — not cessation — will clean up emissions.

3. The current healthcare mess should be replaced root-and-branch by a national health system. That we need a stabilizing public option in health care is more apparent daily. But health reform needs to be introduced like good medicine, prudently with the dosage corrected in relation to the progress of the patient.

Sanders’ approach to most issues can be summed up by what author H.G. Wells, a socialist, said of playwright G.B. Shaw’s ideas. He said the trouble with Shaw, also a socialist, was that Shaw wanted to cut down the trees to erect metal sunshades. Quite so.

In Las Vegas, Sanders was out to cut down every tree he could see. These included what is part of the American Dream: Anyone with pluck and hard work can improve their situation, and maybe grow rich.

Sanders’ assault of Mike Bloomberg was that Bloomberg didn’t accept some mythical belief that money is inherently bad and that those who’ve made a lot of it are evil and constantly conspiring to keep the rest of us in penury — at least those who earn up to the Senate salary of $174,000 a year.

The long-term evil of money isn’t in the generation that makes it, but in the families that will inherit it down through the generations, creating an oligarchy the likes of which we haven’t seen since the fall of the serf-exploiting Russian nobility.

Sanders has another weakness, one shared with Elizabeth Warren, Joe Biden and Amy Klobuchar: It was hugely apparent that he’s never run anything more than his Senate office.

Someone should take Sanders on one side and tell him about failed experiments in worker ownership, the value of evolution over revolution, and that every American would like to be rich.