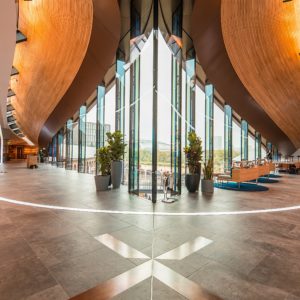 ‘Futurology’ Is About Today, Not Tomorrow

The facility features the “world’s first seamlessly connected driving experience,” a “DJ Galaxy” for “aspiring musicians” to “create, perform and record bespoke beats with the tap of a Samsung smartphone,” and tech to make your “very own free mini 3D figure or even turn a selfie into a unique, personalised collage to share on social media.”

But the electronics multinational wasn’t willing to open its “so much more than a shop” and focus solely on moving product. Celebrating both its 50thanniversary and the christening of KX, Samsung “invited six futurists and academics to look ahead to the next 50 years of digital evolution and predict how it will affect our cities, our travel, our working lives, our food, our leisure and our health.”

For those of us who gleefully track the manifold failures of futurology, “Samsung KX50: The Future In Focus” is catnip. Call us buzzkills, but we know the history of the pseudoscience of forecasting things to come — and it isn’t stellar.

According to Samsung’s super-smarties, just how “will be living in the next 50 years”?

“Samsung KX50: The Future In Focus” will doubtless prove prescient in some ways. Sensors that “track our health status wherever we go” and “luxury space stations” don’t seem too far-fetched. But skepticism is warranted for the bulk of the report’s prognostications.

Consider fusion. It’s been right over the horizon … for the last six decades or so. In 1979, the General Accounting Office dryly noted that while “researchers are optimistic that fusion will be proven to be scientifically feasible in the mid-1980s, in the past, similar optimism has proven to be unfounded.”

Why did the immense challenge of harnessing the force of the Sun appear inevitable in the postwar era? As scientist-journalist John Maddox observed in 1972, the success of the Manhattan Project had dramatically boosted expectations: “If science and technology could accomplish such wonders during wartime, why should they not also make people healthy, prosperous, and even wise?” That kind of giddiness prompted the chairman of the Atomic Energy Commission to predict “electric energy too cheap to meter,” and a U.S. Department of Agriculture research administrator to envision an early-21st-century farm with weather-control devices to tame “hailstorm and tornado dangers,” grain “funneled into a pneumatic tube,” nuclear plants supplying power “to level hills or provide irrigation water from the sea,” and cattle pens resembling “high-rise apartments.” (A processing plant would pack “beef into cylinders for shipment to market by helicopter and monorail.”)

Then the backlash struck. Speculations about the wonders of technocracy were rapidly replaced by the hysterical jabberings of the eco-left. Paul Ehrlich, Barry Commoner, Amory Lovins, Jeremy Rifkin, Jimmy Carter, David Suzuki — to them, the future would bring an unsustainable population, worsening pollution, resource depletion, mass starvation, and all-but-certain nuclear conflicts. (“Climate change” is merely the latest manifestation of doomsayers’ fetish for apocalypticism.) New Frontier overconfidence had given way to infantile — and guilt-driven — timorousness.

As we approach the third decade of the new millennium, thoughtful people are beset by both forms of futurology. Millions actually believe that a possible temperature rise of a few degrees portends humanity’s extinction. (Some advice for these poor souls: Google “Maunder Minimum.”) And a digital booster in “Samsung KX50: The Future In Focus” writes about not missing “shaking hands physically with your colleagues, because holographic interfaces and biofeedback systems make it feel that you are physically connected and engaged.” (As many screen addicts have discovered, in brutal fashion, virtual reality is no substitute for depression-fighting social interaction and health-boosting contact with animals and the outdoors.)

“The future,” David Gelernter told WIRED in 2000, “was and remains the quintessential American art form. Other nations sit back and let their futures happen; we construct ours.” Unfortunately, we also construct obtuse, ideologically blinkered, policy-influencing visions of tomorrow that prove to be wildly off the mark. And we’re no longer alone. Samsung’s contribution to futurology demonstrates that America’s “art form” has gone global.