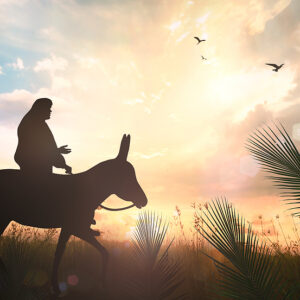 G.K. Chesterton on When a Donkey Had a Divine Assignment

Who, in God’s name, praises the donkey? The answer is G.K Chesterton the English writer (1874-1936). Chesterton, a convert from Anglicism to Catholicism and a force in literary life in London, wrote a little masterpiece for Palm Sunday, which Christians will celebrate this Sunday.

He also wrote much else, including a celebrated essay defending orthodoxy, and the “Father Brown” detective stories, the television version of which can be seen on PBS.

Like Chesterton, I celebrate the donkey on Palm Sunday. The lot of the donkey hasn’t been a happy one. It has been man’s worst-treated servant, having been forced into labor over thousands of years.

Donkeys are probably the most abused animals on the earth. Anyone who has visited poor, agrarian countries whether in Africa, Asia or Latin America, has almost certainly seen donkeys carry loads too heavy for them, sacks of grain, lumber or people — cruel burdens for the little animal.

In this service, donkeys die young at between 12 and 15 years old. If kept decently and as pets they live 30 to 50 years, rivaling horses, which, more prized, have had a somewhat easier time down through the millennia.

There are an estimated 40 million donkeys in the world including about 5 million feral ones in Australia which, like the rabbits, are considered pests.

Chesterton was as prolific, as he was enormous, weighing maybe 300 pounds and standing over 6 feet. He wrote 80 books, hundreds of poems and short stories, and over 4,000 newspaper columns and essays. He was notorious for his untidy dress, being compared to an unmade bed by a friend, missing trains, and not knowing where he had gotten off.

In the years immediately before his death in 1936, he became a huge BBC Radio personality because of his ability to ad-lib during broadcasts of essays, giving these a human, unrehearsed quality. He was also a wit and was friendly with the wits of his time, including Oscar Wilde and Bernard Shaw. He said to the physically trim Shaw once that he looked as though the country was suffering from famine and to which Shaw replied, “You look as though you caused it.”

The gospels have it that Jesus rode into Jerusalem the Sunday before Easter on an ass and throngs of the faithful laid down palm branches in their path.

Courtesy of the Poetry Foundation, here is Chesterton’s poem, first published in 1927, to the beast of burden, and its divine assignment:

When fishes flew and forests walked

And figs grew upon thorn,

Some moment when the moon was blood

Then surely I was born.

With monstrous head and sickening cry

On all four-footed things.

The tattered outlaw of the earth,

Of ancient crooked will;

Starve, scourge, deride me: I am dumb,

I keep my secret still.

Fools! For I also had my hour;

One far fierce hour and sweet:

There was a shout about my ears,

And palms before my feet.