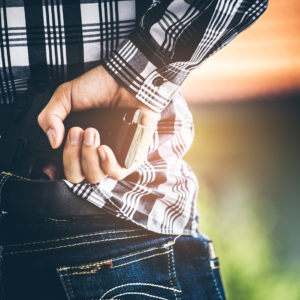 Seven days before the game-changing midterm elections, CNN host Don Lemon blurted incendiary comments that resulted in a social-media firestorm. Speaking in the wake of the mass shooting at a Pittsburgh synagogue, Lemon offered his take:

“We have to stop demonizing people and realize the biggest terror threat in this country is white men, most of them radicalized to the right, and we have to start doing something about them.”

Though, Lemon made no mention of what we will call the “underground mass shootings” — meaning those that involve the violent subculture of black gang members, usually in urban areas.

Lemon didn’t apologize or perform the Michael Jackson moonwalk backing off his “white men” assertions. Instead, he maintained a Rock of Gibraltar stance.

All of this prompted Fox News Channel correspondent Gregg Jarrett to go ballistic, as he spoke for many conservatives when he lambasted Lemon with this blistering rebuke via Twitter, “CNN’s Don Lemon has now removed all doubt that he is a racist, hypocrite and idiot all rolled into one. Quite the accomplishment.”

That heavy-handed criticism from the right was expected.

To follow that up, into the fray vaulted Project 21, a Washington-based black conservative group that released this statement excoriating Lemon, “CNN President Jeff Zucker recently called out the White House for its criticism of the media, saying President Trump doesn’t comprehend the importance of the words he uses. It’s time for Zucker to put his own house in order — starting with explaining how Don Lemon’s outrageous statement can stand in light of Zucker’s call for civility.”

Now, that fiery response was unexpected.

Regardless, Lemon said don’t demonize, then proceeded to do just that, as the CNN decision-makers appeared indifferent to this whole exercise in race-baiting and self-aggrandizing soliloquies.

Eleven days after the Pittsburgh massacre, 12 people were killed in a mass shooting on “College Country Night” at a bar/restaurant club in Thousand Oaks, California. This time, Lemon didn’t repeat his divisive diatribe.

This brings us to the what-ifs:

Such as, what happens if a white, conservative anchor — the opposite of Don Lemon — blurts that Americans’ biggest fear is being robbed or burglarized or beaten or mugged by a young black male or males.

Will Lemon and his vocal/social media supporters suddenly scream racism? Remember, Lemon set the rules by encouraging people “not to demonize any one group or any one ethnicity.”

Then, he went all “D-word” on one group in opening Pandora’s Box.

And what if mass shootings by black gang members were covered by the media with the same intensity as those massacres in predominantly white upper middle-class to elite-class areas such as the Squirrel Hill section of Pittsburgh and Thousand Oaks?

Tracking mass shootings is uneven at best. Some tracking operations count black gang shootings as mass shootings; others don’t, ostensibly because they don’t fit the norm of massacres that we see during wall-to-wall coverage on the cable news networks.

Mimi Chapman, interim associate dean for doctoral education in the School of Social Work at the University of North Carolina at Chapel Hill, packaged the gang vs. extremist dichotomy into context this way: “Much like this (mass shootings), in the early days of the AIDS epidemic, we saw different manifestations of a very complex problem. Eventually, we learned the common element to those manifestations was the HIV virus. Likewise, the common thread between the white male extremists and the gang shooters is the ubiquitous availability of guns —  whether they are legally or illegally obtained. Bottom line, it doesn’t seem to matter.”

Also, we don’t often see the virulent world of gangland culture on cable news or Page One because:

—Gang-member incidents essentially involve criminals shooting other criminals (with innocent black folk invariably caught in the crossfire), so the sympathy/empathy factor is much lower.

—When observers say black people don’t commit mass shootings, don’t believe them. Their viewfinder is locked on the tunnel-vision dial. Remember these cases?

Hadiya Pendleton was a 15-year-old black honor student from Chicago who performed as a majorette during President Barack Obama’s second inauguration in Washington on Jan. 20, 2013. Eight days later, she and a group of friends were enjoying an unseasonably warm day in a Chicago park. Two black gang members (a shooter and his getaway driver) apparently thought that group was rival gang-bangers, who had often frequented the park. The gang shooter fired multiple shots indiscriminately at Pendleton’s group. Pendleton was killed and at least two of her classmates were wounded. Then-first lady Michelle Obama spoke reverently at Pendleton’s funeral.

Lemon also evoked the specter of bans for white males that night on CNN, asking, “There is no travel ban on them. … They had the Muslim ban; there is no white-guy ban. So what do we do about that?”

OK, in extrapolating upon that logic, then do we explore the possibilities of a black gang-member ban? Or black males in general?

And during an annual all-night art fair in June in Trenton, N.J., two rival factions quarreled and fought before gunfire erupted. At least 17 fair attendees — several of whom were black — were wounded. Three people exchanged gunfire, and one of them, a 32-year-old black reputed Bloods gang leader just out of prison, was shot and killed by police.

With that, here is an astounding FBI statistic: Black folk comprise 52 percent of the murder victims in the United States, though they represent a mere 13 percent of the population.

Many of them die (or are wounded) in said “underground mass shootings.”