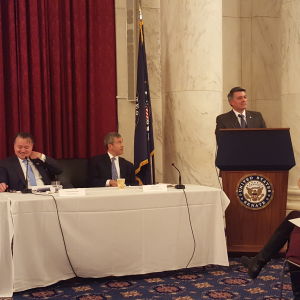 Following the Paris attacks, Americans are again worried by the prospect of terrorism and armed conflict. The presidential race has now been refocused to reflect the growing concern over terrorism, even as the economy remains weak. But some in Congress see one particular issue threading the needle of addressing both security and economic concerns: energy policy.

The decades-long ban on crude oil exports was the topic of discussion Tuesday morning on Capitol Hill at an event hosted by the American Council for Capital Formation (ACCF). Sen. Cory Gardner, R-Colo., called for lifting the ban, a reform that has drawn bipartisan support but has failed to move through Congress.

“We have antiquated policies that were put in place in the 1970s that prohibit us from exporting our crude oil, yet we have allies around the globe asking the United States to provide them with a stable supply of energy,” Gardner said. “We should change this policy in order for the U.S. to be a global leader and to support our allies by making them less dependent on energy from hostile nations.”

Citing an upcoming legislative calendar that includes several must-pass omnibus bills, Gardner sees the possibility for action. “I am hopeful that Congress can lift the crude export ban this year — there are still opportunities for this to pass.”

After Gardner’s remarks, a panel of experts discussed the rising demand for energy in Asia as the region has industrialized. “Over the last three decades the Asian economic miracle has lifted 1 billion people out of poverty,” said Clara Gillispie, director of Trade, Economic, and Energy Affairs at the National Bureau of Asian Research. “But with 700 million people still without regular access to energy and demand forecasted to continue to rise, ensuring access to adequate energy supply that can sustain economic growth is a key issue for the region.”

Gillispie explained the debate over crude exports is being watched closely in Asia. “Because of the scale of Asia’s demand, regional self-sufficiency, especially in China, is not realistic.

“Stakeholders in Asia are closely following the debates surrounding the U.S. ban on crude oil exports, as many see reform as a step that could ease concerns about pricing and supplies and sends a significant signal to the Asia-Pacific region about our commitments to free trade and open markets,” she said.

Another panelist, George David Banks, executive vice president of ACCF, authored a recent paper on what it could mean if rising Asian powers don’t find alternative sources for oil. The paper concludes, in part: “If the energy scarcity concerns of the Asia Pacific region are not adequately addressed in a multilateral context, tensions are likely to increase substantially as the demand for energy explodes over the next few decades. At the very least, pre-World War II tensions in the Pacific should inform that consideration.”