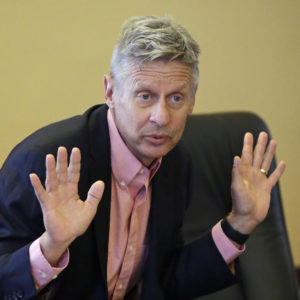 Libertarian Party presidential candidate Gary Johnson is having a rough couple of weeks. Polls show Johnson gained little, if any, ground on Hillary Clinton and Donald Trump in August, and now many of those who support him or who have been considering throwing their support behind him have bailed on Johnson after he suggested during a recent CNBC interview he is “open” to supporting a carbon tax.

Under a carbon-tax scheme, businesses, power plants and/or individuals are taxed based on the amount of carbon-dioxide-emitting energy they consume. The theory behind the plan is if those who use a lot of energy, especially large businesses, are forced to pay more for electric power and gasoline, they will likely use less energy or buy more energy-efficient appliances, machinery and more-fuel-efficient vehicles.

Johnson says he believes catastrophic “man-caused” global warming is occurring and that a carbon “fee” is one “free-market solution” that could help save the planet.

Even if it is accepted catastrophic man-made global warming is now underway — a claim many scientists dispute — Johnson’s “solution” could have a disastrous effect on the nation’s economy and would likely drive energy prices to all-time highs. For some, the economic tradeoff may be considered worthwhile, but it is more than a little bizarre for a self-described libertarian to suggest the answer to any problem is to enact a massive government taxing scheme that would almost certainly be regulated by a substantial and centralized bureaucratic regime.

All this hasn’t gone unnoticed among Johnson supporters and others who have been rooting for the candidate’s success in a presidential election year offering few pro-liberty policy solutions. A slew of bad press has made the past week the worst one faced by Johnson’s campaign yet, with many labeling Johnson a “far-left” candidate disguised under the Libertarian Party banner.

Opposition to Johnson’s carbon tax has been so swift and unforgiving, Johnson quickly reversed course on the plan, saying at an August 25 rally in New Hampshire, “If any of you heard me say I support a carbon tax … Look, I haven’t raised a penny of taxes in my political career. … We were looking at — I was looking at — what I heard was a carbon fee which from a free-market standpoint would actually address the issue and cost less. I have determined that, you know what, it’s a great theory but I don’t think it can work, and I’ve worked my way through that.”

Even Hillary Clinton, who has called on the nation to produce one-third of its electricity using renewable energy by 2027, says she won’t back a tax on carbon-dioxide because, according to Clinton’s campaign chairman John Podesta, “the politics of this are toxic.” Podesta recently reversed course slightly on this, suggesting in early August a President Clinton would consider a carbon tax if Congress sent a proposal her way, but “tight now we’ve not proposed a carbon tax.”

The politics of a carbon tax are undoubtedly “toxic” — as Johnson will most certainly tell you — and for good reason. Australia enacted a carbon tax in 2012 that charged $21.50 for each ton of carbon dioxide emitted, increasing annually, by the nation’s power plants. The tax was lauded by Democrats and President Barack Obama, who said it was created for the “good of the world,” but the policy was such an epic disaster that Australia repealed it in 2014 after household electricity prices skyrocketed by 15 percent in a single year and unemployment rolls rose by 10 percent.

Carbon taxes are often sold as a tax on rich businesses and heavy polluters, but the truth is low-income and middle-income people are the ones who suffer the most, because power companies and industry pass on their costs to consumers.

Gary Johnson, who has long characterized himself as a champion of the free market, should have known better than to get behind an obviously flawed and anti-free-market policy. Apparently, he didn’t, and now it may very well cost him a significant chunk of his support and any hope of capturing the White House in November.