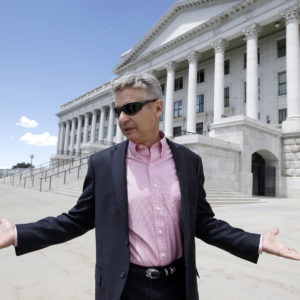 Gary Johnson’s Election Plan Is So Crazy, It Just Might Work

Now that Donald Trump and Hillary Clinton have officially been named as the presidential nominees for their respective parties, both campaigns will shift their focus toward capturing the White House in November—and destroying one another in the process.

Most political experts believe the rest of the 2016 election will end up being the most divisive, angry, mudslinging affair in modern political history. And while the current election cycle has been nothing short of depressing for many Americans, one person has found for himself a potential opportunity in the midst of political chaos: Libertarian Party candidate Gary Johnson.

So far, Johnson has received more media attention in this election than any Libertarian Party presidential candidate in history. The former two-term Republican governor of New Mexico, Johnson couldn’t be more different than his two traditional-party competitors. He’s mild-mannered, and his seemingly odd, nontraditional combination of policy ideas leave many voters from all over the political spectrum agreeing with every other thing he says.

Like many libertarians, Johnson can generally be described as very fiscally conservative, a defender of individual and states’ rights, and socially liberal, including on issues such as abortion.

Johnson’s foreign policy views have been termed by many to be “isolationist” and “dovish,” even compared to most Democrats. For instance, unlike Clinton, Johnson did not support the Iraq War, and he also opposed bombing Libya.

Johnson has called Trump’s plan to build a massive wall on the U.S.-Mexico border “crazy,” saying the government should make it “as easy as possible to come into this country to work.”

Johnson’s rare blend of conservative and liberal policies would normally make him rather unattractive to many voters—especially older, entrenched voters who are more comfortable with the traditional Democrat-Republican divide. But this election is unlike any other in modern American history. Clinton and Trump are wildly unpopular. One recent Reuters/Ipsos poll shows a majority of U.S. voters have a negative view of both Clinton and Trump, and 21 percent of the likely voters polled said they won’t vote for either candidate.

Just because voters are less than pleased with the Clinton-Trump choice doesn’t mean any candidate other than those two can attain the 270 electoral votes needed to be named president, and virtually all political analysts and historians—in line with conventional political wisdom—agree Johnson has no hope of victory.

But rather than admit defeat, the unconventional Johnson is employing a fittingly unconventional political strategy, which could, as unlikely as it might sound, end with a Libertarian in the White House.

Ron Meyer—editor of Red Alert Politics, a right-of-center political website—reported on July 8 Johnson’s strategy of capturing the presidency is fixated on stopping both Clinton and Trump from earning 270 electoral votes by focusing on winning a very small number of states. Depending on which states Clinton and Trump win, it’s possible for Johnson to deny both candidates the electoral votes they need by winning as few as one state.

Should Johnson be successful at denying everyone the White House on Election Day, the 12th Amendment to the Constitution states the president would be decided by the House of Representatives, currently controlled by a significant majority of Republicans. Each state delegation in the House would have one vote, and voters would only be allowed to choose from the top three candidates.

While some might think Republicans in the House would by default choose Trump, but Johnson believes it would be possible—and maybe even likely—anti-Trump constitutional Republicans and Democrats fearful of a Trump presidency might come together to form an otherwise unthinkable coalition that would make Johnson the president.

This wild scenario may not be as absurd as it sounds. Johnson only needs to win one strategically chosen state, and as Meyer points out, “He is already polling at 10 percent overall and around 20 percent among millennials—all while he only has less than 50 percent name recognition.”

Johnson’s off-the-wall plan is a bit crazy, but in an election such as this, crazy might actually work.