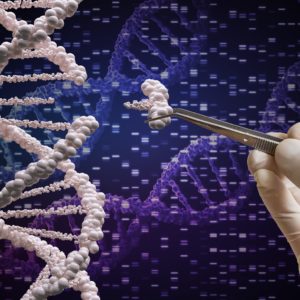 Genomics and the Shadowland of Ethics

In health, ethics and economics often intertwine like DNA’s twin helices. Genomic technologies vastly reconfigure the economics of health care, and ethicists struggle to maintain a framework of morality around the innovations.

After centuries of close quarters and in-community marriage, a significant percentage of Jewish people of Northern European descent (“Ashkenazim”) carry genes associated with serious illnesses. Perhaps the worst is infantile Tay-Sachs, a disorder that slowly shuts down a seemingly normal baby’s nervous system. At three to six months, the child cannot turn over, crawl, or sit. Blindness, deafness, dysphagia and paralysis follow. Death arrives in a few years.

One of every 30 Ashkenazi Jews carry the Tay-Sachs gene. The disorder is autosomal recessive, meaning symptoms only present if the child inherits the gene from both parents — a 1-in-4 chance if both parents are carriers. So, in a random marriage between two Ashkenazim, each child has a 1-in-3,600 (1/30 x 1/30 x 1/4) chance of developing Tay-Sachs.

In the deeply religious “Ultra-Orthodox” communities, concentrated in Brooklyn and Israel, marriages are still arranged by matchmakers (“shadchanim”), based on multiple criteria. For more than 30 years, an organization called Dor Yeshorim has tested almost all children in these communities for around 10 genetic disorders. (“Dor Yeshorim,” from Psalm 112:2, is Hebrew for “upright generation.”)

Test results go into a database, with children identified only by personal identification numbers. To avoid stigmatization, those tested aren’t told whether they carry any problem genes. When a shadchan considers matching a couple, he enters their PINs together into the database, and the computer reveals whether the couple shares any of the recessive genes. If so, he advises against the match, but never says why. The families never know whether the match was called off because of genetics or because of finances, personalities or other criteria.

For a full generation, these communities have experienced nearly 100 percent success in preventing these illnesses. The practice, however, is controversial, because some critics consider it to be a new version of eugenics — the discredited pseudoscience that was once highly respected by academicians and laypeople.

Eugenics sought to extend the selective breeding of agriculture and animal husbandry to human beings. The idea was that, armed with genetic data, we could breed superior human beings and eliminate problematic offspring.

A toxic blend of eugenics and cost-benefit analysis provided the logical underpinnings for the infamous Supreme Court case Buck v. Bell — which greenlighted forcible sterilizations of tens of thousands of Americans. At its most extreme, eugenics handed the Nazis a scientific veneer to plaster over their mass extermination of millions. Nazi deputy leader Rudolf Hess declared, “National Socialism is nothing but applied biology.”

The debate over Dor Yeshorim is intense among Jewish ethicists. After all, the Ultra-Orthodox communities that participate in the program are mostly descendants of those murdered because the Nazis judged them to be genetically undesirable.

The questions arise: Is Dor Yeshorim practicing an updated form of eugenics? If so, is that justifiable, given their families’ grim history in Europe? Answers don’t come easily. For the community involved, the absence of state coercion is a critical difference between then and now. To critics, that’s not enough.

Since few of us live in religious communities that rely on matchmakers, Dor Yeshorim may seem distant from our world. But could genetic testing services like 23andMe, combined with online dating services, bring Dor Yeshorim’s capabilities to the rest of us?

What should we think about Iceland’s near-elimination of Down Syndrome by genetic testing and abortion? Is it OK for prospective parents to choose their child’s gender in advance, raising the specter of the numerical imbalance already ripping at China’s social fabric? Do we want to precision-design our babies’ height, hair color, eye color, and IQ before birth? To what extent should we employ gene-editing to alter humans after they are born?

As science illuminates the hidden corners of the human genome, will we breed away the autism spectrum? And if so, how many Mozarts or Einsteins or Teslas might we discard in the process?

Ultimately, the biggest question — and the most difficult to answer — is: Will future generations view our answers more charitably than we view the eugenicists’ outrage?