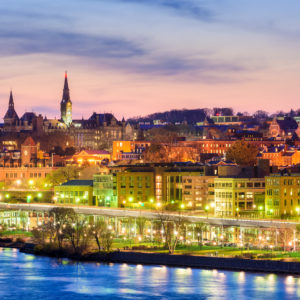 Georgetown, Washington, D.C. skyline on the Potomac River.
[IS] Opinions

Georgetown President on Truth — and Its Consequences

The question was about truth. “If President Donald Trump were a student of yours, Jack, what would you share with him,” asked Steve Clemons, Washington editor-at-large for The Atlantic magazine.

John J. “Jack” DeGioia, president of Georgetown University and recipient of a doctorate in philosophy from the school, responded in detail:

“I’d love to have him in my seminar. I taught one a year ago on truth; it was called ‘Telling Truth.’ Basically, we try to look at how do you establish truth claims in the natural sciences, social sciences and humanities. What enables you to have confidence that you are in possession of the truth? What do you do when you come into challenges to what you possess? How do you make your case, how do you defend positions that you have?

“We believe (by establishing) a dialogue, as rigorous as we can be, together we can arrive at the truth.”

Perhaps, Trump, accused by many of being truth-challenged, should take note. Just a suggestion.

DeGioia, 60, recently was the featured speaker during a running conversation titled “We the People,” which is a themed series of discussions continually held at The Atlantic offices in Washington.

On this occasion before about 125 onlookers, the core topic was free speech and civil rights on college campuses for “We the People” — the first three words to the preamble of the U.S. Constitution.

OK, what is the fine line between free speech and harassment?

The University of California-Berkeley and Middlebury College in Vermont have been in the news lately as speeches by invited conservative figures were thwarted because of outrage and protests by students and other dissenters opposing the nation’s right-wing political bloc. Both situations ultimately ended in ugly fashion as each speaker — right-wing author/commentator Milo Yiannopoulos in the Berkeley case and contentious sociologist Charles Murray in the Middlebury incident — faced shout-downs from hostile, and even violent, crowds.

DeGioia, referencing a policy initially implemented in 1989, said Georgetown “does not limit speech either on the content of the view or the person expressing the view.”

But what about provocative speakers, such as Yiannopoulos and Murray?

DeGioia said Georgetown plans in advance, offering, “Now, when we have a particularly controversial speaker, we may do other things … provide other kinds of programming to ensure a full range of perspectives are heard.”

DeGioia, the longest-serving president at Georgetown with a 16-year tenure, also discussed the university’s confrontation with its ugly past and its journey to atonement and reparation.

In 1838, Georgetown sold 272 slaves for about $115,000 — equal to $3 million in today’s U.S. dollars. During those days, black enslavement was as common as academics at Georgetown, the oldest Catholic and Jesuit university in the United States.

Georgetown, founded in 1789, counted on the Jesuit plantations of Maryland to help maintain university operations, as slaves often were gifted to the university by wealthy churchgoers. The sale of those slaves by Jesuit priests who served as Georgetown presidents directly helped save a foundering university drowning in at least $500,000 debt (today’s currency) as it faced basic survival. With that, Georgetown went from a school that almost closed nearly 200 years ago to an elite university with an endowment today of nearly $1.5 billion.

“The university benefited from that sale,” acknowledged DeGioia, the first non-priest named school president in Georgetown history. “We looked very seriously at what we could do as a university in this moment to address this fact. Part of what we’re wrestling with in America today is the legacy of never having resolved the original evil of slavery in the mid-part of the 19th century. We never ameliorated the effects of the original evil.”

As a result, in the last two years, Georgetown has launched two special project— one focusing on slavery, memory and reconciliation and another examining racial justice in the United States.

DeGioia also asserted that a study by Georgetown’s center for health disparities revealed white males have a life expectancy of a staggering 15 years longer than black males in today’s District of Columbia.

“We can take you across a range of issues — wealth creation, housing, employment opportunities. We’re living with the legacies of slavery and subsequent segregation in this moment.”

Georgetown sought to correspond with descendants of the 272 slaves, DeGioia said. With that, the school essentially aims to offer similar assistance to those descendants that the university extends to the children of its faculty, staff members and alumni.

“We intend to give the same care and attention to children of the descendants,” DeGioia said.

And there was a serendipitous discovery: “As we’ve been out on this journey we’ve discovered that some of the descendants are alumni.”

What about the Georgetown slave traders?

To further make amends for the sins of generations past, Georgetown, in the midst of student demonstrations demanding expedition of the atonement process, approved the removal of the names of the Rev. Thomas F. Mulledy and the Rev. William McSherry from campus buildings. They were the Georgetown presidents who presided over the slave sale.

Now, back to the First Amendment …

Citing a study by the Knight Foundation in Miami, DeGioia said younger adults, such as college students, exhibit a much higher level of confidence in publicly exercising free speech than older adults. However, black students, he added, display less confidence in practicing freedom of assembly.

Then, DeGioia advanced the argument — with truth as his backdrop. “It’s great to have this freedom,” he said, “but it takes a tremendous act of courage to speak as one wishes. This is a dynamic we’re all wrestling with.”