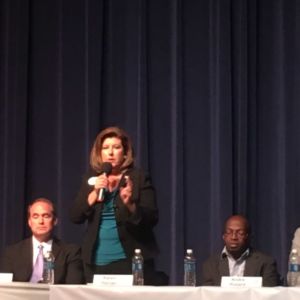 Former Georgia Secretary of State Karen Handel, a Republican, stands to address the audience in the Dunwoody High School auditorium as she campaigns for the congressional seat vacated by Tom Price, on Sunday April 9th. (Leo Doran/InsideSources).
News

Georgia Is on Washington’s Mind

Dunwoody, Georgia­­—The adage is that all politics is local, but you wouldn’t know it by looking at Jon Ossoff’s campaign finance disclosures, at least according to his special election opponents. The candidates running to fill the congressional seat of newly-appointed Health and Human Services Secretary Tom Price jostled for attention at a forum held by a local homeowner’s association on Sunday, and some took pains to point out that the leader in the polls, a previously unknown Democrat, has received millions from out-of-state donors.

Georgia’s 6th Congressional District is normally a quintessentially safe seat for Republicans, but a perfect political storm has put the top Democratic challenger, Ossoff, within striking distance of a major upset. The special election to replace Price has attracted nearly twenty candidates and the national media spotlight.

Democratic strategists are framing the topsy-turvy poll numbers as a referendum on President Trump, but conservatives in the suburbs north of Atlanta think liberals may be getting ahead of themselves. Despite the national attention the race has gotten, some on the right believe that the unconventional rules governing special elections in the state are skewing the way the race is perceived outside the district.

In special congressional elections in Georgia, all candidates appear on the same ballot for the first round of voting, which is a week away in this case, on April 18th. The top two vote getters are to face off in a June run-off election, unless one of the candidates earns more than 50 percent of the vote.

Democrats have coalesced around Ossoff, a documentary journalist and former national security staffer for Georgia Democratic Representatives Hank Johnson and John Lewis. And, because the Republican vote is highly fractured, the polling numbers suggest Ossoff is the only candidate with a chance to win the race outright in April.

According to Dick Williams, a longtime Atlanta-area columnist, television host, and most recently, the publisher of the local Dunwoody Crier, the problem for Republicans is that their leading candidates are “basically all the same; they are basically all establishment Republicans.”

Those top Republicans include Karen Handel, Georgia’s former Secretary of State, Judson Hill, a former assistant U.S. attorney and a state senator, Dan Moody, a former state senator, and Bob Gray, a mild-mannered business executive who has drawn attention by being the only viable Republican in the race to eagerly adopt President Trump’s platform. Combined, these Republicans appear to have more support in the district than Ossoff, but by siphoning away support from one other, they have allowed the 30 year-old to surge ahead in the polls, raise an unheard of $8.3 million for a House race, and dominate the national coverage.

Williams, whose commentary leans to the right, spoke with InsideSources, minutes after co-moderating the Dunwoody Homeowners Association forum that saw the entire crowded field (including a number of eventual also-rans) on stage. He is not convinced that the Democrat leading in the polls will be able to pull off a victory in what was once Speaker Newt Gingrich’s seat.

“You’ve got to remember, it’s not a primary—it’s a special election. So Ossoff is running first among the Democrats, while Republicans are having a primary among four or five other candidates,” said Williams.

If Ossoff does not reach the key 50 percent threshold in the first round of voting, Williams predicts the Republicans will rally behind their top vote getter, who will then be favored to win in June. Many are looking at Karen Handel to save the seat, who despite losing her last two statewide elections, is narrowly leading the Republican vote and has a name-recognition advantage over the other conservatives.

On the other hand, Ossoff has spent 6 million dollars to carpet-bomb the local airwaves, and lawn-signs urging residents to “Vote Your Ossoff,” have popped up all over the district. His supporters appeared at Sunday’s forum in force; many longtime Dunwoody residents, including Williams, said they had never seen such a liberal audience for a political event in the district. The National Republican Congressional Committee, which typically stays out of the fray until a top Republican candidate emerges, has been forced to spend money to counter the Democrat with attack ads.

The larger national dynamics at play in the Georgia 6th raise questions about a potential political realignment in the age of Trump. Special elections held immediately after a new administration takes office are often read by the national media as a referendum on the President.

In 2010, the parties’ roles were reversed when the moderate Republican Scott Brown shocked Massachusetts Attorney General Martha Coakley in that deep blue state’s special election to replace Sen. Ted Kennedy. That race, which deprived Senate Democrats of their filibuster-proof majority in the upper chamber, was interpreted as a repudiation of President Obama and presaged an electoral meltdown for Democrats in the midterm elections that fall.

While the national Democratic donors backing Ossoff are hoping for a similar national narrative to emerge in reverse, the reality on the ground in the affected parts of Cobb, Fulton, and DeKalb counties has its nuances. While it is true that the district is usually reliably conservative (the Cook partisan voting index has it as an R +8), President Trump only carried the area by one point over Hillary Clinton, while Romney outpaced Obama by more than 20 points in 2012.

Or as another Georgia native working on a Republican campaign that had not authorized him to go on the record said: “it’s a polite Republican district.”

Georgia 6th Republicans are the kind of “establishment” Republicans that supported Sen. Marco Rubio, R-Fla., in the presidential primary, and whom Trump lambasted on his way to the nomination. According to Williams, the district is narrowly pro-choice, and many were deeply disturbed when a recording of the President’s “locker-room talk” emerged in October.

By nationalizing the race, the Ossoff campaign and the Democratic Party is hoping to ride lukewarm support for the President to victory. Ossoff has released advertisements promising to act as a check on presidential power if he should win the seat. Meanwhile, locally, as he tries to reach the last centrists in the district he needs to emerge victorious, Ossoff is casting himself as a pragmatic dealmaker. Ossoff’s middle-of-the-road answer to a question about climate change during the Sunday forum drew less applause from his supporters than a stronger response from another liberal in the race running far behind him.

“Ossoff was smart,” said Williams, “he knows he cannot be a foam-at-the-mouth liberal in this district.”

Gray is betting that while the suburban district may not mesh with Trump stylistically—he said he wishes the President would “put Twitter on the shelf”—he does believe the voters support Trump’s policy proposals on the merits.

When asked if there were any substantive issues he disagrees with Trump on, Gray answered succinctly: “No.”

Despite his surprisingly strong performance, Gray is struggling to break through to the top-tier. Handel, Hill, and Moody have each represented parts of the district in state or local government, and many of the Dunwoody residents in attendance indicated that they represented trustworthy known commodities.

One longtime conservative voter, Pete Thomas, a retiree in the district, said “I don’t know much about Bob,” when asked if he supported Gray. Thomas, who was wearing a pro border-patrol cap, said he was planning to vote for Handel or Moody.

One thing is certain to Thomas, however, Ossoff is definitely not right for him. The retiree said he is suspicious of the huge amounts of cash Ossoff has raised from outside the district, and he is wary of reports that the Democrat has embellished his resume.

“He’s a little too slick for me,” summed up Thomas.