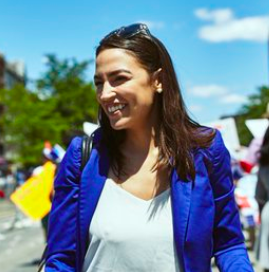 Go Green on the High-Tech Bandwagon

The newly seated Democrats in the House have lessons to learn, but none more than not to tell people what you’re going to take away from them.

That was the great mistake Alexandria Ocasio-Cortez made when she laid out her Green New Deal. It sounds like big stick from big government.

She said everything should be done, from rebuilding the entire stock of American housing (which can’t be done) to phasing out air transport (which would never happen) to tackling cow flatulence (which is a smelly challenge). Dreamy nonsense is nonetheless nonsense, and nonetheless has a political price.

It is a bad posture to say to people that you’re going to take things away from them — whether it’s their money in taxes or their way of life — to achieve environmental goals.

The problem with Ocasio-Cortez’s statements is that she’s seen, wrongly, as the new face of the new, far-left Democratic Party. Come the election, Democrats will have to spend time distancing themselves from the Ocasio-Cortez brand of utopian dreaming while capitalizing on their environmental brio.

Foolish extreme suggestions neither woo those who are going to decide the next election nor are they in the dynamic tradition of successful politics. You tell people you are going to fix things, not take them away.

Underlying the Ocasio-Cortez argument, which was codified in a non-binding joint resolution, is the basic idea that the only way to save the planet is to cut all carbon emissions in a very short time and to substitute solar, wind and hydro energy.

Omitted from the statements by Ocasio-Cortez and her Senate collaborator, Edward Markey, D-Massachusetts, is any mention of nuclear, which is still the largest carbon-free source of electricity and hardly scars the face of the earth compared to wind and solar. Maybe that is because Markey has spent his whole career in public life trying to shut down nuclear.

In fact, the environmental movement spent long years fighting nuclear. When I would ask, in conferences in the 1980s, what they would use in lieu of a robust nuclear regime, they would answer coal. But to make it sound environmentally acceptable, they said it should be burned in circulating fluidized bed boilers. These offer some advantage, using limestone to precipitate out sulfate.

Missing from the Green New Deal is any sense of the new, i.e. how technology can help.

Take aircraft. They are in the early stages of development, but an electric airplane is in the sights of the big airframe manufacturers. Boeing, for one, is working hard on electric airplanes. Electric air taxis are being experimented with in Dubai and about to be tried in Frankfurt.

The Green New Deal, which is short on details, only endorses one technology outside of wind and solar: high-speed rail. Unfortunately, Ocasio-Cortez is boosting it at a time when California is drastically cutting back on the U.S. entry into the high-speed rail game. The United States sat that one out, and it may be too late to get into the game.

But there is hope.

The success of Amtrak’s electrified Northeast Corridor points the way: People will use regular trains if they are available and the track is good enough for them to travel at a reasonable speed of about 150 mph. The immediate answer is better track allowing more express trains, like Washington to Boston or Los Angeles to San Francisco without stops.

Nearly all the problems of the climate are amenable to technological solutions. The new fusion of high technology across the board in smart cities will, among other things, reduce the carbon footprint through efficiency and electrified transportation.

Ocasio-Cortez is a fresh voice in the nation: brave and as yet unbeholden. If she can grasp that we are on the threshold of a brave new world of technology, called the Fourth Industrial Revolution, she’ll see how it can solve many problems, including those it seems to create in climate. Then she’ll have a political product to sell that people will buy.

The one place where technology seems to offer no solutions is with cows and the challenge of Flatulence Arriving Regularly Today (FART).