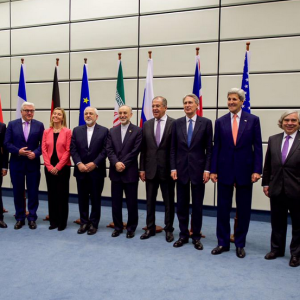 Go Set a Watchdog on Iran

People crave certainty. There’s comfort in black-and-white, good-vs-evil comparisons. The ink was barely dry on the deal limiting Iran’s nuclear program when pre-written tweets started flying and for-against op-eds began appearing. Measuring the polarization on an issue is easy these days—look at the volume and tone of the arguments being lobbed from one camp into the other. Emotionally-charged debate is the fertile land where motivated reasoning—seeking out evidence that confirms your prior beliefs—takes root and grows. A measured and nuanced analysis of the agreement shows reasonable people can support it while also recognizing that there are still many miles to go.

Opponents of the deal argue as if it is the final word that restricts future action. But the agreement won’t disallow use of other tools (e.g. intelligence, military capabilities) from ensuring that Iranian words match actual compliance. There are more than a few in the toolbox: for example, the UN Security Council resolution on the issue would restrict conventional weapons acquisition, mitigating a concern raised by deal detractors. What the legal framework does do is set a new threshold for behavior—a new level of integrity for Iranian peaceful intentions that now carries automatic penalties if violated.

An agreement also sets the pathways for coordinating international action, a notoriously difficult task. Importantly, it buys time and space for future actions should Iran cheat. Conversely, if the deal is scuttled now, future coordinated diplomacy may be off the table for some time. After all, who wants to negotiate with an unwilling and unstable partner? Ultimately, an agreement would let both sides signal that they are willing to change the 30-year cold war. Relations between long-time adversaries can change slowly or rapidly (e.g. Cuba, Germany, Japan) – but first steps need to be taken together.

Other opponents of the deal argue that the complicated legal document has too many technical aspects up to interpretation, offering too many outs. Arms control experts would argue that this is in fact a feature, not a bug, of the agreement. Overlapping clauses and stipulations in the agreement ensure that if Iran tries to find a loophole from one direction, another clause serves to cuts them off. The angel is in the details: Verifiability requires these interlocking mechanisms to cut off potential avenues to cheat on an agreement. In contrast, the 1994 Agreed Framework with North Korea is two-pages and implementation of that agreement was plagued by omissions and flaws. Bigger is better for arms control agreements.

“No deal is better than a bad deal” is the oft-repeated mantra of opponents. But the potential futures are not quite as simple they might have us believe. “No deal” increases the probability of several worse-off scenarios. “No deal” makes it harder to bring together the same effective international coalition on the issue as a result of negotiating fatigue and broken promises. And “no deal” may spur the Iranian leadership, pushed by hardliners, to decide their only route to safety is to pursue a nuke.

The potential spiral of events from this point, then, includes a Saudi nuclear acquisition and an Israeli military strike. Many of the same backers of “no deal” also back Israel unconditionally. These backers therefore endorse a potential wider scale war with Iran, an unwise policy gamble that breaks the Princess Bride rule against starting land wars in Asia and that ignores the expected costs of such a conflict. Why go down this dark path when the alternative has such better prospects.

Imagine that the year is 2017. The headline: U.S. intelligence confirms that Iran successfully tests a nuclear bomb. The future is uncertain, but scuttling the newly signed agreement on limiting Iran’s nuclear program turns this terrible fiction into a more probable reality. The praising response from around the U.S. foreign policy community proclaiming the agreement as “historic” might be a bit premature—just which side of history the agreement will land on is not yet known. After the Congressional 60-day review period, we will learn whether we choose a path to peace or a much murkier one.

Backing the Iran deal is the sensible option that gets us going down the right road and empowers a verification and monitoring regime that, enforced properly, can work. Members of Congress have the opportunity to make this right choice in the coming weeks by voting in support of the agreement. The time is now to set a watchdog on the Iranian nuclear program.