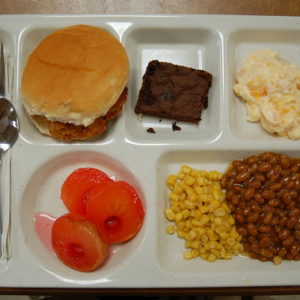 Is it time to make school lunch great again?

Newly-elected President Donald Trump has already used his executive order authority to gut several landmark laws of the Obama administration, including approving the Keystone and Dakota Access Pipelines, and issuing a directive on the Affordable Care Act. Members of the Freedom Caucus are hoping that he will add another repeal to his plate–school lunch. Rep. Mark Meadows, chairman of the House Freedom Caucus, called for a repeal of elements of the Healthy Hunger-Free Kids Act of 2010 as part of a plan of action for Trump’s first 100 days in office.

“The regulations have proven to be burdensome and unworkable for schools to implement,” reads the Freedom Caucus report. “Schools are throwing food away that students are not eating.”

Passed in 2010, the Healthy Hunger-Free Kids Act was part of then-First Lady Michelle Obama’s push to curb childhood obesity. It took effect in 2012, when the U.S. Department of Agriculture, which manages the subsidized school lunch program, began mandating that children take either a fruit or vegetable whether they wanted to eat it or not. Although the program missed a Congressional renewal deadline in September 2015, it remains in effect.

The understandable result of forced vegetable selection has been a massive increase in food waste. A 2015 report compared rates of fruit and vegetable selection, consumption, and waste by elementary school students before and after the requirements. The study found that while children were slightly more likely to take a fruit or vegetable, these healthy servings were also more likely to end up in the trash.

“In a recent survey completed by 240 school nutrition directors, more than 80% subjectively reported an increase in the amount of [fruits and vegetables] (especially vegetables) wasted by students,” the researchers wrote.

The increased waste had a noticeable effect on school budgets. In September 2016, the American School Superintendents Association wrote to the Senate asking for increased flexibility

“Our requests of the reauthorization, and those of many of our partners at other associations, were for flexibility from the nutrition standards in four buckets: fruits and vegetables, whole grains, sodium and competitive food,” wrote AASA Senior Legislative Analyst Leslie Finnan.

By the end of Obama’s presidency, the seemingly innocuous proposal had become widely disliked by both students and administrators. A bill to improve the recommendations stalled in a House committee late last year and reauthorization of the requirements failed to pass last year, leaving the program essentially unchanged.

With the start of the Trump administration, it looks like the program’s days may be numbered. As with other portions of the Let’s Move program, the status of the school lunch directives remains unclear. According to her LinkedIn profile, Debra Eschmeyer remains the executive director of the program and a White House Nutrition policy adviser. However, the program’s website has not been updated since a blog post on January 4, 2017 and Rep. Meadows put the Healthy, Hunger-Free Kids Act first on his list of programs to repeal.

A query to Meadows’ office about legislative action to repeal the act had not been answered by press time.