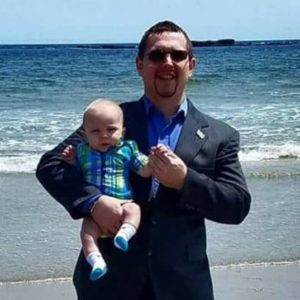 GOP’s Bertone, Running Against ‘Satanic Agenda,’ Just One of Many Colorful NH Candidates

New Hampshire has the fourth-largest English-speaking legislature in the world, behind only the United Kingdom, the United States and Canada — respectively. At the same time, it has a minuscule percentage of those countries’ populations, making the state’s legislature the most representative in the world.

With 424 legislators representing the 1.35 million Granite Staters, and nearly 800 or more candidates every two years, it’s no surprise New Hampshire has some of the most colorful people in American politics.

In Cheshire County, for example, the current GOP nominee for sheriff is a transsexual Satanist anarchist. In Hudson, a Democratic state representative candidate was highlighted for his criminal past, including a 2019 arrest for domestic violence.

This summer, a Republican state lawmaker was forced to resign following his own arrest for domestic violence. CNN has labeled a Dover Democratic representative as the politician with the most colorful Twitter feed.

And North Hampton Democrat Rep. Tamara Le was suspended from the House Education Committee after posting “F*** private and religious schools” on her public Facebook page.

So when word broke that the Republican candidate in state Senate District 4 believes Satanists run America and our nation is under threat from the “Luciferian” Freemasons, it didn’t generate as much attention as in other states.

Republican Frank Bertone, who ran in 2018 for state representative as a Libertarian, has a Facebook feed that could make QAnon blush.

“The Constitution is outdated & irrelevant,” says one post on the ‘Senator Frank Bertone’ Facebook Page. “Can you handle the truth?”

It’s true that progressives are also attacking the U.S. Constitution. Some are calling it “obsolete” and demanding radical changes like eliminating the Electoral College. Calling the Constitution “outdated” sounds like the talking points of AOC and “The Squad,” but Bertone’s argument is much different.

The Constitution “hasn’t been in effect for the last 30 years!” his post exclaims. “The courts will uphold appearances of course simply because they don’t want the American people catching wind of this.” 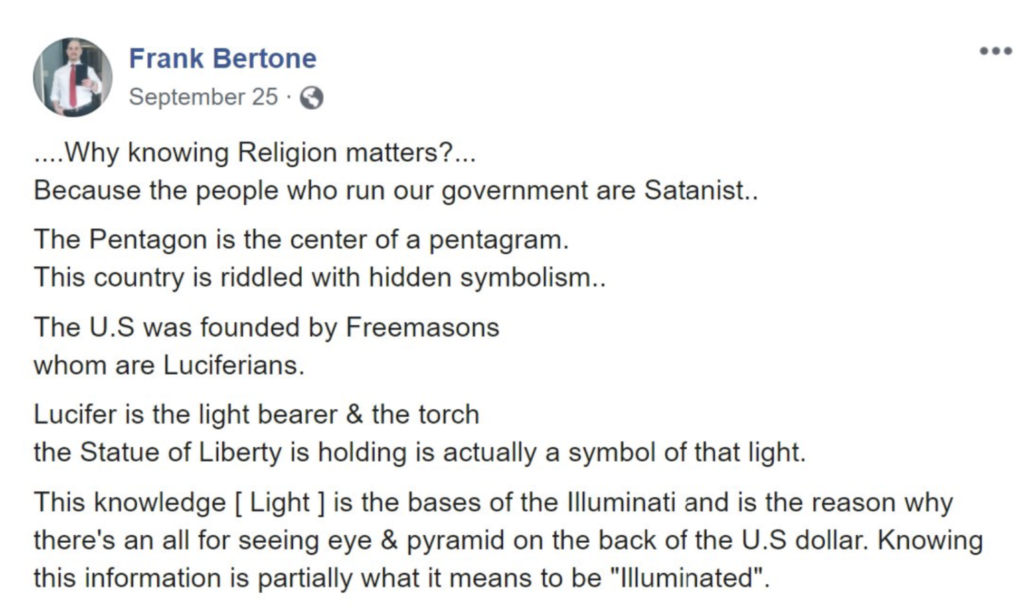 Bertone continues to call the LGBTQ agenda and the Black Lives Matter movement a distraction from the “nefarious, satanic agenda keeping people from leveling up and raising their vibrations.”

“The people who run our government are Satanist,” Bertone said in a September 25 Facebook post. “The Pentagon is the center of a pentagram.”

“The U.S. was founded by Freemasons whom [sic] are Luciferians,” Bertone added.

All it took for Bertone to get his name on the ballot as a state Senate candidate was $10 and a signature. New Hampshire’s only other requirements are that you’re at least 30 years old and you’ve lived in the state for the previous seven years. (And some candidates struggle to even clear that low bar.)

Bertone was the only candidate on the GOP ballot in the September primary and so he’ll face Democratic incumbent Sen. David Watters. Watters, the uncle of Fox News personality Jesse Watters, has represented the seat since 2012. The district has a partisan voter index of Democrat +7, rendering it a likely “safe” seat for Democrats.

In his 2018 house race, Bertone won just 187 votes as the Libertarian candidate, coming in fifth in the two-member district.

“But I have a point to prove!” he says, and wonders, in yet another post, “Why vote for a candidate to “lower taxes” when YOU could Renounce your citizenship [and] pay no tax at all?”

Both Bertone and Watters declined to comment for this article.