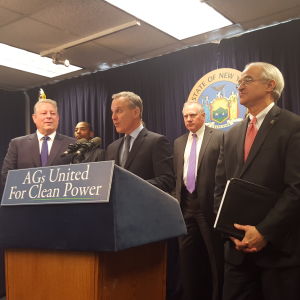 Gore, Schneiderman Defend Exxon Investigation: ‘This Is Certainly Not a Publicity Stunt’

Former Vice President Al Gore and the attorneys general of six states and the U.S. Virgin Islands gathered in New York on Tuesday to hold a press conference discussing how they plan to join together to combat climate change. The press conference was short on specifics as the laws of each state are different, but the host of the event, New York Attorney General Eric Schneiderman, focused his attacks on ExxonMobil, the oil giant that his office has been investigating since November. The attorneys general of California, Massachusetts, and the U.S. Virgin Islands have said they will also investigate.

Schneiderman stated that the conference of attorneys general was the first of its kind, and that it set out with the goal of finding “creative ways to enforce laws being flouted by the fossil fuel industry and their allies in their shortsighted efforts to put profits above the interests of the American people and the integrity of our financial markets.”

Gore applauded the efforts and took his turn at the podium to accuse ExxonMobil of criminal wrongdoing. “I really believe that years from now this convening by Attorney General Eric Schneiderman and his colleagues here today may well be looked back upon as a real turning point in the effort to hold to account those commercial interests that, according to the best-available evidence, have been deceiving the American people, communicating in a fraudulent way,” stated Gore.

Gore went on to argue that this case against ExxonMobil runs parallel to the fraudulent claims of the tobacco companies and the role of state attorneys general in prosecuting tobacco executives over the course of 40 years.

But InsideSources asked Schneiderman and Gore about a report in the New York Times that notes: “The history at ExxonMobil appears to differ [from that of Big Tobacco], in that the company published extensive research over decades that largely lined up with mainstream climatology.” The Times goes on to point out that ExxonMobil made disclosures to investors about the risks of climate change, a point that Schneiderman’s investigation is expected to focus on.

“We think [Exxon] should welcome our investigation because unlike journalists we will get every document, and we will be able to put them in context, so I’m sure they’ll be pleased that we’ll get everything out there and see what they knew, when they knew it, what they said, and what they might have said,” Schneiderman responded.

Schneiderman’s explanation matches perfectly with what critics worry is a “dangerous arrogation of power,” according to a Bloomberg View editorial that also called the investigation “preposterous.” Critics see Schneiderman’s actions as a witch hunt designed to seize documents from a company, make them public, and attack the company in the media and with frivolous lawsuits for political purposes despite no proof of criminal or civil wrongdoing.

“This is certainly not a publicity stunt,” retorted Schneiderman when asked about the criticism and the flaws in the approach noted by media outlets.

Gore responded that ExxonMobil had known for decades about changes in sea levels and climate that it used for business planning, though he admitted the company did publicly release scientific studies that match mainstream climatology. The former vice president pointed out that ExxonMobil provided funding for think tanks and grassroots organizations opposed to costly government action against climate change. Some of these groups also denied the existence of climate change, which Gore pointed to as an impetus to investigate.

But according to the New York Times, Exxon stopped funding climate denial groups nearly a decade ago. In an interview with the Times, an ExxonMobil spokesperson explained: “We stopped funding [those organizations] in the middle part of the past decade because a handful of them were making the uncertainty of the science their focal point … Frankly, we made the call that we needed to back away from supporting the groups that were undercutting the actual risk” of climate change.

Many organizations that have received grants from ExxonMobil do not deny climate change but are opposed to new taxes and economic sanctions by government to mitigate it. This would get to the heart of a political debate and would come nowhere close to suggesting criminal or civil damages.

If Gore and Schneiderman continue pushing forward on the investigation and their claims ExxonMobil’s political efforts constitute “fraud,” their efforts could signal a new era in politics.