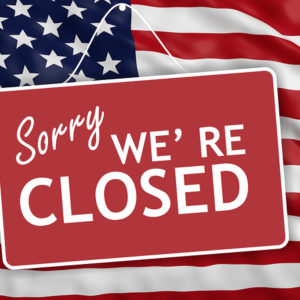 Government Shutdown Has No Economic Justification

President Trump’s administration is proving to be a significant threat to the American economy. Between the tariffs and the cronyism, the economy is slowing. But, whenever you add the economic implications of an extended government shutdown, the risks amplify.

Officially, Trump has single-handily presided over the country’s longest partial government shutdown. As a result, thousands of federal workers are either furloughed on extended leave or must report to work without pay until funding is resumed. Meanwhile, Congress and the executive branch continue to have one of the most damaging partisan fights of Trump’s tenure: Fund the ill-conceived border wall, or key agencies won’t receive the funding they need to pay employees, conduct regulatory actions, or commit to normal day-to-day operations.

According to JP Morgan Chase CEO Jamie Dimon, the partial government shutdown could have a negative effect on the entire economy. Though he predicts that any recession yet to come won’t be as damaging as the Great Recession, Dimon remains adamant that Trump’s shutdown politics and his overall trade and economic policies could see a noteworthy decline in the markets.

Dimon cited an assessment in the New York Times, by economist Ian Shepherdson of Pantheon Macroeconomics, that analyzes the potential economic effect if the government shutdown lasts the entire first quarter of the year. Shepherdson believes that if the government is partly shuttered for the first quarter, any economic growth during that period would be virtually wiped out.

The same Times report further indicated that the White House didn’t expect the economic effect from the shutdown would be so negative and immediate.

Historical trends suggest that shutdowns have minimal effect on economic growth; however, that trend could be snapped as this shutdown is now affecting a series of regulatory bodies that allow for certain commercial segments to operate within legal compliance. On the fronts of the consumer and the business owner, uncertainty abounds as many across the United States now feel the grip of the shutdown while realizing how invasive the federal government truly is. One of the latest examples of this can be seen within the craft beer industry.

The Alcohol and Tobacco Tax and Trade Bureau (TTB), a small regulatory agency with immense influence under the purview of the Treasury Department, is currently shut down. Due to the TTB’s lapse in service, craft brewers are unable to receive the necessary approval for the interstate sale of their beer. According to the Federal Alcohol Administration Act, as interpreted by regulatory rulemaking, TTB must approve all labels for beers that enter into interstate commerce under the law’s certificate of label approval (COLA) provisions. Without this approval, a brewer cannot sell its beer in other states due to the lack of a COLA approval and proper merchant licensure. Though this rule is required for the sale of new brews, the TTB is one of the several dozens of agencies furloughed by the lack of funds.

A craft brewer inside the Capital Beltway, Atlas Brew Works, has brought forth a lawsuit against the federal government in the U.S. District Court in the District of Columbia. The suit seeks a motion for a restraining order from the legal requirements of the COLA provisions so that Atlas can sell its beer without federal approval. Ultimately, Atlas argues that it should be able to sell beer to out-of-state customers without an act of Congress. By preventing the interstate sales, Congress and the federal regulators violate their First Amendment rights, according to the suit.

Other cases of the government shutdown impacting commerce can be seen when it comes to the distribution of services contracted by the government through private corporations. Additionally, the regulatory frameworks could come to a halt in several industries beyond the immediate case presented here and the adjacent private sector tied to federal contracting.”

In a commentary for MarketWatch, Cato Institute’s Chris Edwards writes: “The problem with the shutdown is not that President Trump is holding the government ‘hostage,’ as House Majority Leader Steny Hoyer said, but that the government has taken hostage of too much of the U.S. economy.”

These comments couldn’t be more valid.

This shutdown further reveals how much the power of the federal government has grown. Edwards characterizes this extension of power as an octopus. I characterize it as a virus. I don’t discount the benefits of sound, market-friendly regulation and consumer protection measures, but, there is a line that’s been crossed. Too much regulation forces businesses and consumers to rely on the government to provide certain services.

Eventually, the government becomes the only entity allowed thus monopolizing and preventing the potential for self-regulatory efficiencies from the private sector. Add the “suck salad” of a government shutdown to that, the government’s monopolies of service are then shuttered, and commerce is interrupted. Risking the country’s overall economic health because of the partisan divide in Washington isn’t acceptable. Both Congress and Trump are to blame.