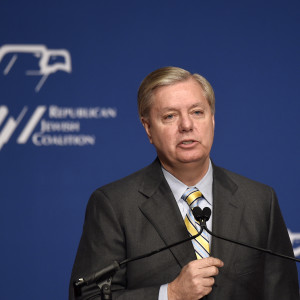 Graham: Clinton Was ‘Quite Together’ in Debate, Trump Should Prep Better

In contrast, the senator said Trump — whom he’s criticized sharply since running against the New York businessman in this year’s primary — missed opportunities to score points against Clinton during their Hofstra University forum.

His advice to Trump ahead of the second debate: “Prepare better.”

Graham’s comments came at a morning session of the Washington Ideas Forum in the nation’s capital, put on by the Atlantic and the Aspen Institute.

The senator said Clinton’s challenge for the November election is that voters don’t trust her and she doesn’t sufficiently understand popular anger in the electorate, which Trump has seized upon. At the same time, he thinks Trump’s temperament and judgment raise concerns — especially, Graham stressed, on immigration and foreign policy.

“Saying that Putin is our friend doesn’t make it better,” the senator said, alluding to Trump’s fondness for the authoritarian Russian president.

Asked about current congressional issues by Bloomberg View columnist Margaret Carlson, Graham predicted lawmakers would not shut down the government this year and would secure funding to get clean water to Flint, Michigan, and fight the Zika virus.

Graham also urged voters to re-elect his close friend, Sen. John McCain, R-Ariz., in November, saying he “can’t imagine the Senate without” him.