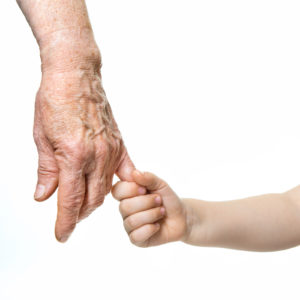 Grandmothers and Gender Equality: We Stand on the Shoulders of Giants

Posted to Politics May 30, 2018 by Natalie Gonnella-Platts

The sole survivor of a family of seven, James “Kassaga” Arinaitwe was raised in rural Uganda by his grandmother. Overcoming hardship and daily challenges, she never gave up on her grandson’s potential, committing herself to ensure he received an education.

Traveling alone by bus to Uganda’s capital at the age of 11, James’ journey would take him to an elite secondary school in Kampala, a full scholarship to Florida State University, a Global Health Corps Fellowship, and a nationwide movement that aims to end educational inequality.

Speaking on next generation leadership at the Bush Institute’s inaugural Forum on Leadership, James underscored the influence of his grandmother: “Grandmothers mean the world to me. … It would be impossible for me to be here without my grandmother and without an education.” He added, “It’s incredible to know a kid who climbed cactus trees and would dream of what the world would look like without my parents, without anybody except my grandmother (is) standing in front of you, sharing my story.”

Today the co-founder of Teach For Uganda, James and his colleagues are working to recruit, train and develop promising university graduates and young professionals working to expand educational opportunities for children across his country. An exceptional journey, his story has wider application to us all.

When women are educated, their families are more likely to be healthy and educated. Every additional year of primary school increases a girl’s earning potential later in life by 10 percent to 20 percent, and an extra year of secondary school by 15 percent to 25 percent. Moreover, compared to children born to illiterate women, a child born to a mother who can read is 50 percent more likely to survive past the age of five.

When women can fully participate in the economy, communities flourish. Women invest a more significant portion of their earnings back into their families than their male counterparts. And according to a 2015 McKinsey Global Institute report, closing gender gaps “would add up to $28 trillion, or 26 percent, to annual global GDP in 2025.”

And countries thrive when women hold equal and active roles in society. While our culture often cites leadership in terms of political and private sector prowess, the influence of James’ grandmother is equally as important. In the face of formidable obstacles, James succeeded. His grandmother’s resolve was an early catalyst in his success and his commitment to improving outcomes for others.

However, despite notable gains in gender equality across the last century, women and girls still face significant barriers. Violence and abuse; inadequate access to education and quality health care; underrepresentation in corporate and elected leadership; and the gender pay gap (to name a few) continue to hold women, girls and wider societies back.

Advancing the status of women and girls worldwide is in the best interest of us all.  Strengthening laws and protections, harnessing the power of data, and leveraging the unparalleled impact of partnerships can and are altering this trajectory. But increased investment, advocacy and engagement at every level of society are still very much needed.

In considering the vital impact of women’s leadership, and grandmothers in particular, I can’t help thinking of my own great-grandmother, Theodora Edington, and the ways in which she challenged the status quo of her era. A mother, activist, and impressively skilled chocolatier, in 1947 she co-founded her own business, a candy store whose name still endures today in Buffalo, New York.

An active community member for much of her life, prior to her entrepreneurial endeavors she organized the union at the factory where she worked, advocating for better working conditions. Determinedly self-sufficient, she could also singlehandedly roof a barn, even at 60 years old. Tenacious, bold and brilliant, her leadership inspired women (and men) across my family to build on her example.

As James noted, we “stand on the shoulders of giants.” At home and abroad, we must remain committed to ensuring all women and girls have the opportunity to fulfill their potential. In each of our own journeys as leaders, it is our responsibility and our benefit to stay the course.