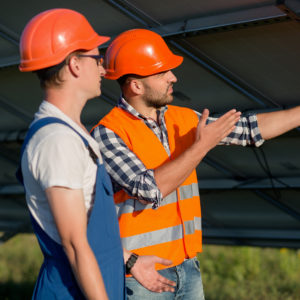 Is Green Energy an Efficient Use of Worker Hours?

Energy efficiency is a key selling point for both price-conscious and environmentally-conscious consumers. People want to buy cars and appliances that use less energy and cost less to operate. When it comes to generating electricity, different fuels have different advantages and efficiency can take on a different sense. The American power grid relies on a mix of nuclear, fossil, and green fuels to generate electricity and employs millions of people. When it comes to employment, though, not all fuels are created equal. In comparison to traditional fossil fuels, green energy is far less efficient, requiring many more workers to generate an equivalent quantity of power.

It a useful metric when comparing different methods of producing electricity. Investment dollars and even employment numbers alone cannot gives a sense of whether a given fuel is the most efficient use of resources.

Green energy may create jobs, but that is because, on the whole, these fuels are less efficient producers of electricity than coal or natural gas.

In January, the Department of Energy released its second annual “Energy and Employment” report, which tracked growth in several key sectors of the U.S. economy during 2016. The report studied employment in four sectors of the economy: electric power generation and fuels; transmission, wholesale distribution, and storage; energy efficiency; and motor vehicles, a mix that effectively covers the entirety of the generation and distribution market in the U.S.

According to the DOE’s statistics, out of the green energy options, solar is the bright star in energy employment. Solar technologies employ about 43 percent of the entire electric power generation workforce, or about 374,000 workers.

“Proportionally, solar employment accounts for the largest share of workers in the Electric Power Generation sector,” the report found.

Meanwhile, employment figures in oil and gas, as well as coal, have declined for the past several years. In 2016, 388,000 people worked in the oil and gas extraction industry. An additional 53,000 people worked in coal extraction and related support services. Both of these of industries have seen significant declines in the past several years. Employment in coal has decreased by 40 percent since 2012 and employment in the oil and gas industry has decreased by about 30 percent.

As a result, more people are now working in solar energy than in natural gas. Although this helps the unemployment rate in states like California, where much of the solar industry is located, it does not mean that solar is an efficient use of worker hours.

Natural gas is slightly more complicated, since it is used for a manufacturing purposes in addition to electricity generation and statistics do not always break out natural gas drilling statistics from oil drilling. Even taking industry employment overall, oil and gas extraction produced about 250 megawatt/hours of electricity per worker.

Despite being a less efficient use of worker time, green energy is continuing to grow given the presence of government subsidies and regulations requiring that it be added to the generation mix. In June, renewable energy surpassed nuclear as a generation source for the first time.

“In light of their growth rates in recent years, it was inevitable that renewable sources would eventually overtake nuclear power,” said Ken Bossong, Executive Director of the SUN DAY Campaign.  “The only real surprise is how soon that has happened — years before most analysts ever expected.”

This gap is only expected to grow in the coming decade. At present, about 7 percent of U.S. nuclear capacity is set to go offline by 2025. Even planned replacement reactors will still leave total nuclear capacity falling by 3 percent.

Just because green is growing, doesn’t mean that it is not expensive, however. Even as technology improves, solar remains an expensive alternative to natural gas.