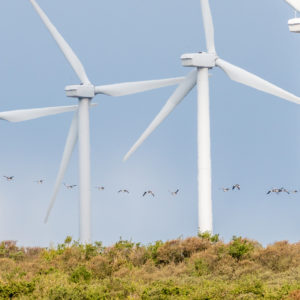 Environmental groups filed yet another lawsuit against the Trump administration on Thursday, trying to overturn a policy that finds that the “incidental” killing of birds is not illegal. In December, the Trump administration’s Interior Department released a memo changing how the government interpreted the Migratory Bird Treaty Act (MBTA). Under the policy change, energy producers, including windmill operators, oil refiners, and others, would not be liable for bird deaths that were not intentional. A coalition of groups including the Natural Resources Defense Council (NRDC), National Wildlife Federation, National Audubon Society, Defenders of Wildlife, Center for Biological Diversity, and American Bird Conservancy, filed suit against the change in hopes of protecting birds. However, many of these groups support wind power, which is responsible for a large number of these incidental bird killings.

“This rule will allow the death of even more birds, whether they’re landing on polluted ponds left uncovered by the oil and gas industry or have their nest trees cut down from underneath them. It’s tragic,” said Noah Greenwald, endangered species director at the Center for Biological Diversity.

Since the policy change was announced, the groups have been arguing that it represents a wholesale bird slaughter, which is sometimes linked to the oil and natural gas industries. Posting on its blog after the lawsuit was filed, the National Wildlife Federation stressed that incidental taking of birds was “best exemplified by the BP oil spill,” and only briefly mentioning bird deaths from wind power. In spite of their concerns, all of the groups support clean energy and wind power explicitly, which is particularly lethal for birds.

Wind turbines kill an estimated 140,000 to 328,000 birds each year, a number which would likely increase as the technology is more widely adopted.

On the whole, the groups tend to emphasize the need to shift to clean energy since climate change presents a greater threat to birds than wind energy. According to the Audubon Society, more than half of American bird species could lose more than half of their current ranges by 2080 due to rising temperatures.

“Wind turbines kill an estimated 140,000 to 328,000 birds each year, but the biggest threat to birds is climate change,” said Garry George, Audubon’s director of renewable energy, earlier this year.

“A speedy transition toward a carbon-free economy that includes responsibly-sited and operated renewables is the best way to protect birds and the places they need,” he continued.

The Audubon Society has pushed for wind turbines to be properly sited so as to minimize bird deaths. However, it has released few details as to how feasible this solution really is. Some prime wind farm sites, such as that of the Altamont Pass Wind Farm in northern California, are in prime migration areas.

Defenders of Wildlife agrees with this approach and was involved in the drafting of wind siting recommendations during the Obama administration. The Center for Biological Diversity has spoken out against wind projects that would harm bird populations, though it also believes that wind power is part of clean energy solution.

Not all of the groups agree, though. The National Wildlife Federation has pushed for rapid expansion of offshore wind power off the coast of the North Atlantic. Materials from the NRDC push for the expansion of wind power, but do not mention the impact it has on bird populations.

“NRDC is helping to bring the benefits of renewable energy to more communities around the globe. In the United States, we develop and support policies that unleash growth in wind and solar power, working at the state level to secure renewable energy standards, promote net metering (which allows solar consumers to sell of the excess power they generate onto the grid), and encourage officials to develop strong plans to reduce carbon pollution,” its website states.

The trouble is that the desire to expand wind power may be impossible to achieve without increases in the death of migratory birds, which are often killed when they strike turbines. The wind energy industry would likely gain from policy changes that lowered the price it paid for these incidental killings.

When the policy was changed late last year, the administration stressed that its goal was to allow for industry growth, saying that the threat of liability for accidental bird deaths discouraged investment and development. Willful bird killings would still be prosecuted.

“Interpreting the MBTA to apply to incidental or accidental actions hangs the sword of Damocles over a host of otherwise lawful and productive actions, threatening up to six months in jail and a $15,000 penalty for each and every bird injured or killed,” Interior Department Principal Deputy Assistant Solicitor Jorjani wrote in the memo announcing the change.

Thus far, the groups have not announced plans to go after the true killers of birds, namely buildings, which result in 300 million avian deaths annually.